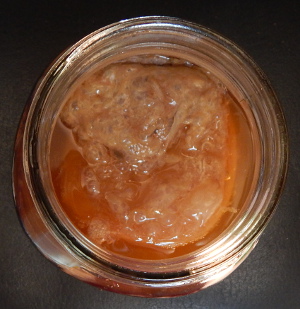 I misunderstood Kombucha. I thought it was healthy and thus tasted medicinal. So, I avoided the mere thought. Plus, I like Makgeolli, Korean Rice Wine, with its rich probiotics. The only problem with Makgeolli is that I hate throwing away all the used rice flour, and eating it is a chore. I tried adding it to spaghetti sauce and ended up with sauce the consistency of tea time shortbread.

Finally I ordered a SCOBY from someone on Amazon and went forward. To my utter surprise, Kombucha tastes good and is a little fizzy.

But, my second batch was dismal in comparison. The two things I did wrong were to fail to appreciate that while I like weak tea, the Kombucha SCOBY likes healthy, strong tea because that’s what provides the nutrients it needs, and second, I got my recipe wrong. I put in too little sugar. I thought that would be easily corrected by adding sugar but when I poured in the missing sugar several inches of fizz resulted, and I think a lot of bacteria died from the “explosion”. Maybe not, but there was suddenly a lot of sediment on the bottom of the jar.

I thought the brew might still be okay, so I let it sit for a week during which time a little bit of new SCOBY formed, but the taste of the brewing Kombucha was not pleasant. I poured the less than stellar Kombucha out in my garden because one video I watched on making Kombucha had talked about putting old SCOBYs around tomato plants, and seeing the tomatoes flourish, .

7/25/2017 ~ Today, I am making a new batch. I’m thinking of this as my True Second Batch. I have used a lot of tea bags, 5 in fact, since they are old Lipton’s that I’d forgotten I had. I’m out of Twinning’s English Breakfast, and my Irish Breakfast has yet to arrive. In reviews of the one pound bag of Irish Breakfast loose tea, Kombucha makers waxed enthusiastic. So, I’m looking forward, and hopeful.

You aren’t supposed to use metal with Kombucha. I think that’s a warning meant for after the SCOBY has been added to the jar of tea and sugar. So, I stir my pre SCOBY liquid with a stainless tablespoon to dissolve the 1/2 cup Fair Trade Organic brown sugar. After I add the SCOBY, I use a wooden spoon if I feel the need to stir.

For anyone who doesn’t want any metal to touch their Kombucha brew, from tea bags to the pouring of the finished brew, Twinnings tea bags have tiny little knots attaching the string to the bag. Liptons has little metal staples.

I use a lot of tea bags, and I don’t boil the water I use to make the tea. I heat the water to pre-boiling and add it to my 2 quart Mason Wide Mouth jar. I think the tea tastes better if it’s made strong via the number of tea bags, rather than the length of time the tea is left to steep. Long steeping seems to result in some bitterness.

After the tea and sugar has cooled for a few hours I add water to the jar, stir, and then add the SCOBY and a cup of so of the previous batch of Kombucha.

Once you’ve made Kombucha, you can simply add a cup of previously made Kombucha and a SCOBY will form as the fermentation takes place. But, it seems as if the original SCOBY creates a much faster brew. My brew with a cup of previous Kombucha is 5 days into the process without an entire new SCOBY having formed. Meanwhile my brew of 3 days using the fully formed original SCOBY is tasty now…

The basis of Kombucha is the SCOBY, the Symbiotic Culture of Bacteria and Yeast. My impression is that once you’ve brewed a batch of Kombucha you can use some of it to brew more, and in subsequent brewings new SCOBYs form. Apparently you can also use your initial SCOBY to brew more batches. That’s what I’m doing right now.

Other uses for old SCOBYs

I read that cutting a bit of SCOBY off and putting it on a cut makes the cut heal faster. I had that in the back of my mind when a deep scratch I got in my garden began to look infected. I had an extra SCOBY, so I tried a bit on the angry red scratch.

I held the SCOBY in place for a few minutes, got bored and gave up. To my surprise, however, the angry red was gone. It didn’t come back, either.

I like using old SCOBYs in containers with my veggies. My plants seem to flourish when they have pieces of an old SCOBY in their soil.

In search of a SCOBY for B12 rich Kombucha

My first thought was to let my tea bags sit for a couple minutes on a piece of Swiss cheese, which is known to have B12 making bacteria in it. They are, after all, responsible for the holes in Swiss cheese.

I have no idea if that worked.

Next I ordered BataBata-Cha tea leaves from Japan. The tea leaves have been tested and show B12 content. Since all B12 is made by bacteria, I felt the content must be related to lingering bacteria. It seemed a reasonable leap of logic to make my Kombucha tea with Irish Breakfast Tea as the black tea component, and BataBata-Cha as the green tea component.

Since I’ve been doing that my SCOBYs have begun to look more robust and much healthier.

And, my digestion is improved. My digestive system appears to be much happier.