7/15/2014 ~ I bought my first chocolate mint plant out of curiosity. After trying a few leaves in my coffee, in the brewing stage, I kept going back to the plant each morning to boost my coffee experience.

Chocolate mint in your coffee is totally different than buying flavored coffee. Or, at least it’s major different taste sensation for me. Flavored coffee tastes artificial to me, more than it tastes raspberry or hazelnut. I’m not a fan of artificial, so when I tried chocolate mint and it tasted a bit like After Eight mints, but in a morning freshness way, I was delighted.

In terms of mint nutrition, if you were to eat a couple tablespoons of mint you’d get a perceptible dose of vitamins A, C and BComplex, minus the B12 except for whatever microorganisms remain on the leaves when you use them, i.e. sans washing.

The outstanding contribution of mint, however, is its ability to alter your perception of heat. Think about Mint Juleps and Mojitos, both favorites in warm climates. Surprisingly the Mint Julep originally functioned as a medicinal treatment for stomach ailments, upsets, nausea and vomiting. It was described as far back as 1784 as a prescription for “sickness at the stomach, with frequent retching”.

Mint, or mentha, from the Greek “mintha” is the source of menthol ~ like Mentholatum. If you’ve ever used Mentholatum you know that it makes the area where you’ve applied it feel warm. Thus, mint can be cooling under some circumstances, and warming under others.

In his Lingual Heat and Cold Sensitivity study, Barry G. Green was able to show that after drops of menthol were applied to the tongue, there was a significant reduction in sensations related to warmth intensity. Sensing cold, however, was unchanged. Read more.

My plant, shown in the picture, is outside in direct, high desert sunlight. I have to water the pot it’s in every day.

When I bought it, it was too early to plant it outside in my garden. After I’d had my chocolate mint plant in the house where I could easily pick a few leaves every morning for my coffee, I didn’t want to take it outside. I thought it made a lovely houseplant ~  But then the stems to the leaves began to turn brown in a rotting sort of way. The plant looked dangerously as if it was going to die.

That’s when I took it outside. Within a week it had formed lots of small new leaves, and it hasn’t quit since then.

My plan is to bring it in this fall, prior to snow. I’m hoping it lives through the winter indoors, happily, with no stems turning brown. 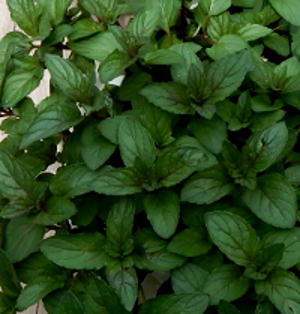 Article Name
Chocolate Mint
Description
I bought my first chocolate mint plant out of curiosity. After trying a few leaves in my coffee I kept going back to the plant to enrich my coffee experience
Author
Karen Kline
Publisher Name
Health Boundaries
Publisher Logo