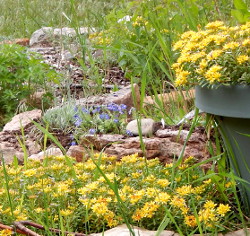 See the little blue flowers? Admittedly they don’t jump out at you, but prior to raising their part of the bed they were totally hidden by the yellow flowers. 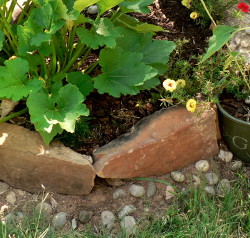 So, if that appeals to you, here’s how I made them. 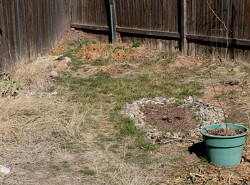 1. I dug up, enriched, and surrounded with small stones an oval in the scorched, angular corner of my garden. (See how dry looking it was? And, that’s about as good as it ever looked.) Though, the area in the foreground eventually sported sunflowers and straggly corn. But it never looked as good as the raised bed.

2. Because plants thrive on water conserved by rocks I wanted a raised bed using big rocks. But, hiring help to move them was going to be costly. So, a raised bed was out of the question… until I found a hand truck that can handle 250 lbs. And, it folds up for storage. Basically, I rolled a big rock onto it, then strolled the rock to the place I wanted it to be in my raised bed. 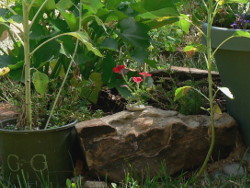 3. When I didn’t have quite enough rocks, I built a couple of large plastic pots into the bed. The large pot on the right is 24″.

4. I leveled the top, somewhat, by putting stones and clay on the ground where I wanted a particular rock. It was easy to roll a rock up on top of the clay — But, overall I kept it to one rock a day. (I’m still recovering from tetanus, and overdoing things sets me back.)

5. I mixed bark chips, compost and top soil in my shady corner and carted it to the finished beds. 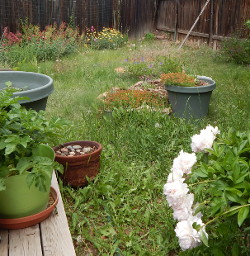 3/20/2015 ~ Today, with the rocks of the raised beds helping to conserve water, my back yard garden looks like a meadow. Sitting and looking at my “meadow” makes me as happy as I would be if I weren’t housebound and could go up on the mountain and see a real meadow.

In the foreground are peonies on the right, a large and small pot of potatoes on the left, on the deck. The nasturtiums in the clay pot next to the deck haven’t yet emerged.

The low growing grass on the left is Buffalo Grass. It has closely knit roots that defy dandelions. A far better choice than RoundUp which kills bees.