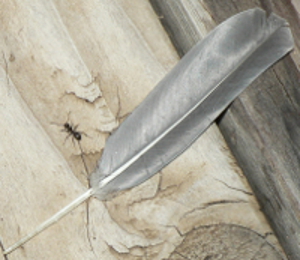 This story of an ant finding a large feather and deciding to take it home began some years ago when I was sitting in my shady corner under my ponderosa. To my surprise a small, fluffy feather began dancing along the ground — very fairy like, if ever there was a fairy moment.

I immediately looked up to see if wind was stirring nearby leaves in a way that could account for the feather’s dance.

When there wasn’t any visible wind movement, I went for a closer look. And, there was this tiny ant with this small, but still much larger than itself, feather.

I went back to my lawn chair and watched the feathery dance, as the ant took its prize home to its hill.

So, when I saw an ant near a feather on my deck, it caught my attention. I went in to get my camera, praying the whole while that it would still be there when I returned. And, as you can see, it was.

The ant mounted the feather as if it were a skateboard, one leg off to propel itself and the feather.

I was sure my imagination was enhancing what I saw, except the feather had moved quite a lot…

but mostly in a circle.

The ant scrunched himself into his work, as if concentrating his energy.

Other ants came but got into a face-off argument instead of helping.

Not distracted by the fighting, the ant pivoted the feather in a continued sweep across the knot…

and switched to the other side of the feather.

But didn’t stay there long.

Nope. Going back to the pivotal position.

Got the hang of it, now.

Either I’ve gotten stronger or I understand this better.

I can just imagine bringing this home.

What’s this… a crack in my plan?

Just easing it over…

Then, either the phone rang or someone was at the door, or in fear he was going to lose his prize into the crevice, I just couldn’t watch anymore.

I remain amazed by the ant’s strength, but am even more impressed by its determination.