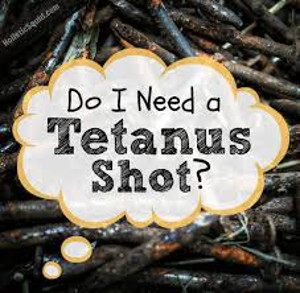 Do Tetanus Vaccinations Cause Neurological Problems?

Hi, Karen–Thank you for your thoughtful and pertinent information. Our son is also non-verbal autistic in addition to developing ALS which probably started around 1997/1998 with dx in September 2002.

Because of the autism we have been looking at all possibilities for his neurological problems. I remembered seeing an “All the Creatures Great and Small” episode where a donkey had foot in mouth disease — which I think is tetanus. Anyway the donkey had to be kept very still and noise could cause some sort of serious problem for his nervous system. It made me think of people with autism and their sensory problems and I wondered if the tetanus immunizations might have precipitated their autism in some cases. Come to think of it, adults are supposed to have a tetanus shot every so many years. I wonder how many people with serious neurological conditions had a tetanus shot a short time before developing symptoms.

Out of curiosity, we had a blood test to check his tetanus levels and he tested 2.88 for tetanus antitoxoid IgG AB – -the reference was 0.10. If I am interpreting this correctly the tetanus is high — his last tetanus would have been about 14 or 15 years before.

Thanks again for your information — God Bless You and we hope that you recover completely.

Wally, Jr. and Mom and Dad

That’s very interesting (I didn’t know that’s what hoof and mouth was) — I say it’s interesting because the site where I found the Vitamin C information is VERY against immunizations. I think her child may have gotten autism as a result of immunizations. I have a link to her site on my tetanus page (because I took information from her site and put it on mine, and I wanted her to get the benefit of whatever added interest there was as a result).

I just call it “site” because I felt like tetanus was so serious and such a danger in terms of survival, that I thought people should have inoculations. But she sure disagrees. She has a huge anti-inoculation site:

Go to the home page to get the general idea — I agree that your son’s level seems to be very high in terms of the ranges I’ve seen. I think you raise a very serious question. This certainly is the kind of thing the vaccine truth site deals with.

Do you think his ALS is related, as well??? It seems like that’s what you are writing. That is such a sobering thought. I made that bit of your post bold, so it sticks out and others look at this question.

Thank you for writing. I appreciate it.

Later a added the following:

I came here to add to my message, by saying that the way I happened to be taking so much B12, was that over the years I’d identified, by means of keeping notes, that I got certain problems, like bloody noses, tingling, numbness, louder tinnitus, etc., when I was low on B12.

So, while I was sick (more sick than now) with the tetanus, if any of these things happened, even if I’d had a B12 shot the day before or earlier the same day, I had another shot.

So, overall I had a shot many, many days in a row, and often two shots a day. Though, I was trying to have fewer shots because the vast majority of doctors had always told me that too much B12 was just as dangerous as too little.

The fact is that I have never found one single research report that supports that statement, but, the thing is that they drilled it into me sort of like hypnotism.

Because of this learned fear — taught me by the very doctors who totally failed to treat my need for B12 and who as a result caused my brain damage and nerve damage that affects my feet and thigh — my aim was to have two shots a week, sort of doubling how much B12 I was having based on the highest amount any doctor had ever told me to take.

Now when I review the actual amounts I was taking, I’m pretty amazed at how much it was… and I bet if I hadn’t been so scared by the doctors that I would have had more.

However, the reason I came here and added this was that I didn’t want to cause people to take too much — I wanted people to know that by keeping track of symptoms, like the tinging, numbness, etc., it’s possible to sort of guage how much your body needs, on the basis of how your body is acting.

I hope I wrote that clearly.

Your fingernails reflect your health —

Learn what warning signs to look for —