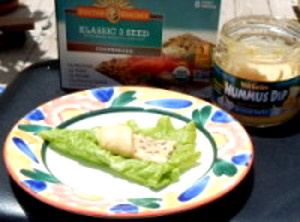 I was eating the lettuce alone, leaf by crunchy leaf. But, I was wishing for salad dressing.

Briefly I ate the lettuce on tortilla chips… oily from frying, yes, but loaded with salt. Switching to Doctor Kracker “Crispbread” has put the gourmet touch to my lunch.

Admittedly I can’t pile things on the crispbread because it’s radically smaller than a lettuce leaf, but I can pile the hummus laden crispbread on the lettuce. So Good! Try it!!!

Wild Garden Garlic Hummus tastes slightly better than the Jalapeno, with lettuce. The Jalapeno tends to give the impression the lettuce has turned bitter.

By the way, Wild Garden Hummus costs less from WalMart than from Amazon. 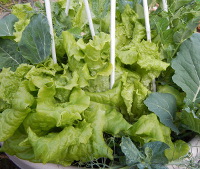 5/8/2015 ~ I was sitting next to my 24″ pot of lettuce, kale and peas, wishing there was a way to grow salad dressing, when I decided to try a fresh lettuce leaf on a tortilla chip. It was great. The fried chip gave the impression of oil in a salad dressing and the flavor combination made it my best breakfast in months.

If you like guacamole on tortilla chips, I bet you’ll love lettuce leaves on organic corn and sweet potato chips. So Good!

All the lettuce in my 24″ pot is from lettuce that’s gone to seed. The real beauty of it is that it doesn’t mind overnight temperature in the low 20s. Which means I’ve been eating fresh lettuce for a few weeks now.

It did not work to grow lettuce inside. I tried. I failed. On the other hand, lettuce grew happily outside in major cold but protected by a popup greenhouse. 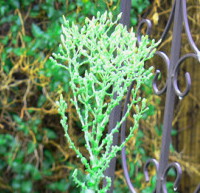 Lettuce goes to seed with my blessing, despite the fact that once lettuce begins to “bolt” it looks a lot like a weed, especially the weeds that resemble hundreds of tiny dandelion flowers held up by a single stem.

My reward for not condemning my lettuce to the compost pot before they can go into reproduction mode, is that lettuce springs up in my garden year after year, thanks to the masses of seeds it produces.

Outside, lettuce shows its little leaves really early. They start out tiny, but sort of thick ~ giving the impression that each leaf has been cut out of construction paper. The tiny leaves form loose whorls, as if they are contemplating becoming heads of lettuce.

As an aside, lettuce that grows in loose whorls, rather than a tight head, like iceberg lettuce, has more vitamin/mineral content, apparently due to more surface area of the leaves being open to the sun.

The lettuce in the picture above  survived snow storms that covered it with ten inches of snow before I brought the pot indoors. Each of the little lettuce leaves started outside has a nice, thickish feel between ones teeth, though it’s easier to appreciate their qualities when the leaves are a tad larger. 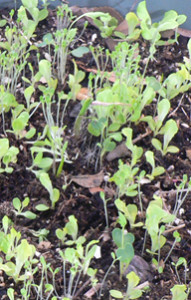 Notice how different the lettuce seedlings look that sprang up after I brought the pot indoors. Each one of those white threads is the stem to a pair of lettuce leaves ~ no short, squat lettuce seedlings here.

If the short squat lettuce is huddling itself away from the sun’s intensity on the high desert, here in Santa Fe at seven thousand feet above sea level, the indoor lettuce appears to be searching for that searing sun. 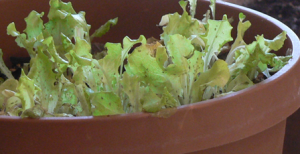 12/31/2013 ~ I’ve transplanted a few lettuce seedlings that began life outside into a pot with rock dust, composted mulch, mycorrhizae and previously used soil. They are under a full spectrum lamp that is only a few inches above them. My lack of success with full spectrum lights and lettuce, previously, may have been due to my failure to position the lamps close enough to the lettuce.

More developed lettuce that I brought in grew new leaves that were far more translucent that leaves developing outside in the sunshine. They feel flimsy in ones mouth, and not as if they are full of strong vitamins and minerals. 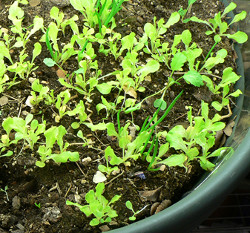 1/18/2014 ~ Actually, I took this picture about a week ago. Since then the lettuce has continued to grow, as have the collards and onions. In fact, I’ve had a few handfuls of salad ~ small handfuls, but still.

I lined the inside top of the pot with foil tape that wasn’t used in my Solatube installation. The foil tape goes on easily and seems to reflect a fair amount of light.

Because the T5 lamp has an ingenious mechanism to raise or lower it, I’ve been able to keep the light fairly close to my plants. Because of the way the lettuce has grown I now believe that my lettuce didn’t grow previously under the same lamp due to the fact I had the lamp too far above the plants. Live and learn!

4/20/2014  ~ The evidence is in. The lettuce outside has grown strong and vigorous in just a couple of weeks. The lettuce inside was unable to match the growth of lettuce outside in natural sunlight. Maybe not all plants need outside light, but lettuce appears to. None of the lettuce that grew indoors was robust in the same way as the outside lettuce.

Makes me wonder if that’s what happens to us, when we don’t go outside, or keep the sun from getting to us by using Sun Screen. Yes, too much sun can cause skin cancer, but knowing about and using astaxanthin can be a healthy way to keep getting the benefits of sunlight. Health Benefits of Astaxanthin ~ Read more.