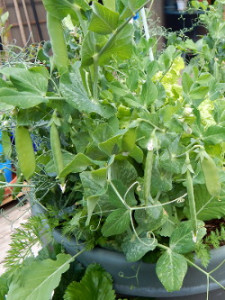 6/22/2015 ~ The peas are terrific. I’ve eaten masses of lettuce. The poor radishes got buried under pea and collard foliage.

The peas in the picture are Maestro,  I think. The Easy Peasy are shorter and more stout plants, but the peas are equally good. I like them fresh off the plant.

Overall, I prefer snow peas so I can eat the shell and all. Next year. Hopefully, I still have my garden next year… I very much hope that Wells Fargo doesn’t take it.

You can see a collard leaf, bottom left, and just above it a carrot’s ferny leaf. I planted carrot seeds among the peas, collards, etc. more as an experiment than in the belief I’d get carrots. But they seem to be thriving.

The light green leaves, toward the top and toward the right, are lettuce. 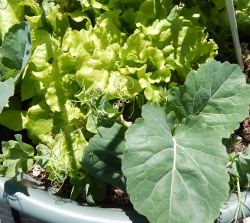 4/29/2015 ~ It’s been about two and a half months since I planted collards, peas, lettuce and carrots in two of my 24″ pots. I’ve been having lettuce for lunch for over a week, but today was my first “harvest” of collards for dinner.

February, 2015  ~ A few years ago I “built” a greenhouse around one of my chrome carts. Ordering the vinyl was easy, as was the green duck tape to seal the sides. What was impossible was changing how metal works: basically, metal gets really cold, so with the metal of the cart inside the greenhouse, it made it very cold for plants.

Similarly but different, little bird made nests in the cross bar of my solar panel pole. During the day when they were nest building it was great. But come night, the metal of the pole and crossbar was far too cold for the little bird to combat by sitting on her eggs. In each case, from robins to sparrows and finches, the happy bird song around the crossbar and nests ended after the first cold night.

Thus, I had to bring my little homemade greenhouse in every night. The greenhouses worked in terms of creating humidity that greatly sped up germination. But, rolling it in every day and out every morning, not the best solution. 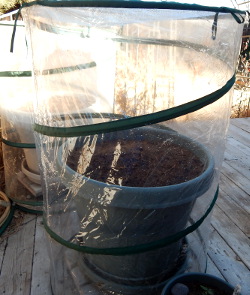 When I found pop-up greenhouses on Amazon I immediately ordered. When slipped over one of my huge, 24 inch Fiskars pots, they don’t need any staking to stay in place, even in high New Mexico winds.

2/11/2015 ~ I planted peas, collards, carrots and radishes today. I don’t know if the carrots will work. I planted the tiny seeds a bit deep because the first problem I have in growing carrots is keeping the seeds moist when they are planted so near the surface of the soil. It’s very dry here on the high desert, so if the carrots can come up through a bit of additional soil, then I think they’ll be overjoyed with the reward of more moisture, for their hard work.

2/18/2015 ~ Either the collards or radishes are beginning to show above the soil. Possibly the collards, since I planted the radish seeds in the thick jackets that surround them when they grown on the plants. 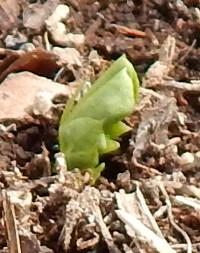 3/2/2015 ~ My Easy Peasy peas are not up yet. They are listed as 65 days to maturity, so probably not surprising. I thought I should try two different kinds, even though Maestro had 5 Star reviews and reviewers said they stopped using other varieties.

I love the folded appearance of pea seedlings.

Two peas, of the Maestro variety, have come up. Burpee lists it as 61 days to maturity.

They’ve come up despite night temperatures in the teens. Also we had several inches of snow. The snow was outside the pop-up greenhouse, of course.

3/24/2015 ~ I thought I would be picking collards for dinner by next week. But today my largest plant was prone, as if it had wilted for want of water.

The soil didn’t appear dry. Still, I rushed to its rescue with a sprinkling can of water. But, not before flicking away the soil near the stem. There were half a dozen armadillo bugs feasting on the stem.

I dug the armadillo bugs out using a ladle that’s thin, and scoops them up more efficiently than a spoon.

I filled in the hole with Coir Seedstarting mix, watered copiously, and am now hoping the plant recovers.

3/26/2015 ~ Yesterday I dug out still more armadillo bugs. Today the collard leaves that had been reduced to lying on the ground, were eaten to the vein. Sigh.

3/27/2015 ~ Well, maybe the armadillo bugs were trying to help when they ate the leaves to their veins. Today the remaining leaf is upright, as if it’s gained strength. The plant is in among lettuce plants, or I’d take a picture to show you what’s going on. 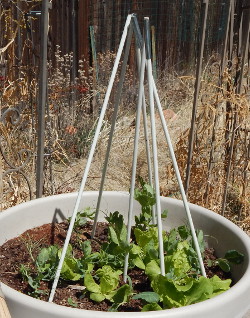 4/1/2015 ~ All of the peas are doing quite well. The tallest is a Maestro, at the back next to the pot rim, but there’s not a lot of difference compared to the Easy Peasy.

I’ve removed the greenhouse and put in stakes for the peas.

The lettuce has provided several leaves for breakfast yesterday and today.