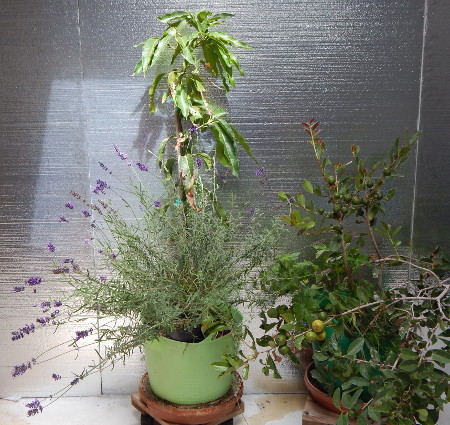 10/12/2018 ~ My mango, on the right has enjoyed having a pot of lavender in with it. The mango also loved having a lot of leaves and other compost bits in its container, as did the worms. My guavas are on the left. There are two in the pot. I was going to separate them, but they were doing so well I decided they are happy as they are.

The guava was badly hit by very large hail we had, early on. It seems to have not enlarged the majority of guavas that were on its branches when the hail hit them.

It did, however, set a few new fruit and they were larger than any it had set in the past. You can see two nearly ripe guavas at the front right.

Of all the container fruit plants I have, the guava is the best producer, by far.

To my surprise, when I brought the guavas in, a few days ago, I noticed that they have new flowers. I’ve not seen them do that in the fall before. 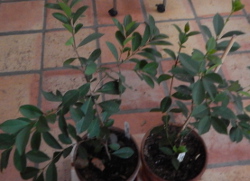 My lemon guavas, suitable for containers, make long branches. It’s hard to believe, looking at them now, that they arrived in 2.5 inch pots last summer.

The one on the right has been under the red/blue LED plant light with my tomato and has lots of new growth. The one on the left has long branches without new growth. It’s been sitting on my candle making table with Solatube and clerestory light.

While I very much want to prune the one on the left, I’m feeling I’d better prune the one making new growth before it goes too far, so to speak.

I hope that Guava trees in the video below and these of a more miniature variety are meant to be pruned in about the same way because after I watched the video, I pruned the one on the right. As an aside, the branches smell really good when they are being pruned.

I pruned the guava on the right. I left the larger one, in part as a contrast, and in part to see how the first one does before I go on to the second. 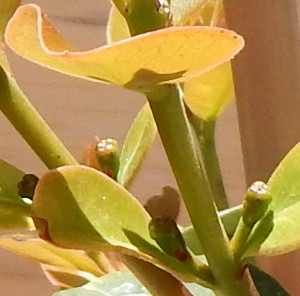 5/22/2015 ~ The pruned guava not only made lots of new leaves, it also seems to have set a lot of little things that look like they could turn into guavas.

The picture was taken in full, high desert sun, so the leaves look a lighter color and more translucent than in real life. The reddish color is pretty common on new leaves here in the High Desert. I think the red must protect young leaves from the intense sunlight. We’re at 7,000 ft above sea level, so there’s less air between the sun and plants than at sea level.

I’d really like to transplant the pruned guava into a larger pot, but I’m afraid it would lose all the promising little fruit things. 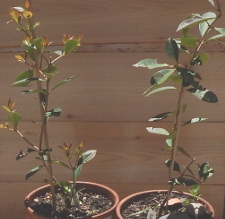 Here are the two guavas, side by side, now that I also pruned back the formerly unpruned guava. The unpruned guava is the one with the big leaves, but fewer leaves all together.

There’s nothing like a flower bud or the promise of fruit… yet, on the formerly unpruned guava.

I’m going to repot the formerly unpruned guava without fruit buds. I think it will set fruit, so I better go repot now.

Nutrition in 1 cup of common guava