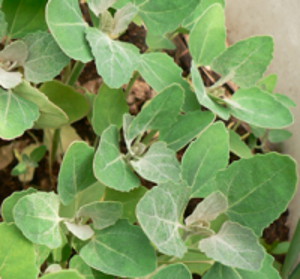 Indian Spinach, also called Lamb’s Quarters and Wild Spinach, tastes as sweet by any of its names. And, it’s very likely growing in your yard.

In terms of nutrient content it’s second only to Amaranth. And yet, have you eaten it? Did you know you could eat it? How do you prepare it?

A Pueblo Indian introduced me to Lamb’s quarters years ago. He said his family called it “Indian Spinach.”

Indian Spinach is a delightful, pick-and-eat salad veggie in the early spring. It’s wonderfully impervious to nighttime temperatures of 20*.

Besides eating Indian spinach in salads, it’s great in omelets and with brown rice. Basically, Yum.

As it grows taller, and mine often goes to 5 feet and higher, the stems become too woody to eat. But, the leaves are larger at that point so it’s still easy to pick and put into dinner.

Indian spinach is major easy to use… it’s clean and hardly takes any washing, unlike other forms of spinach. That’s a real plus in my book!

It’s good to know that there’s a difference in the amount of oxalates in well-watered lamb’s quarters, as opposed to lamb’s quarters that have grown in drier conditions. Notice how light green the lambs quarters plant in the picture at left is. In contrast, the plants shown at the top of the page received hardly any water at all because they were growing with onions. Onions don’t need much water. This lamb’s quarters plant was grown with my lettuce, radishes and peas that I watered daily.

Lamb’s quarter’s are not the only kidney stones culprit, though they do have more oxalate than many of the others, some of which may surprise you, especially if you’ve never heard of or paid attention to oxalates before:

The likelihood of getting kidney stones can be reduced by helpful bacteria that, hopefully, you have in your body. It turns out that bacteria in the rumen of cattle and sheep helps them to be able to safely eat quantities of oxalic acid that would be hazardous for other species. Interestingly the anaerobic bacterium, oxalobacter formigenes, that metabolizes oxalic acid in the rumen is also found in humans. This bacteria uses an enzyme to make a less toxic acid and CO2 from the oxalate.

Another thing to be aware of is that oxalic acid binds with minerals like calcium and magnesium so that you absorb less of the minerals than you might expect or than mineral content seems to suggest.

In an study reported in the British Journal of Nutrition in 2004, researchers compared magnesium absorption from high-oxalate and low-oxalate food: spinach and kale. Participants were given a meal of phytate-free white bread and either spinach or kale, cooked and pur&#233;ed. In the high oxalate spinach meal, study participants absorbed about 27 percent of the magnesium in the meal. In the low oxalate kale meal, participants absorbed about 37 percent of the magnesium. This study indicates that calcium absorption would be affected to a similar degree.

List of Vegetables and their Oxalic Acid Content ~ Keeping in mind that any simplistic, straight forward tabulation of the “oxalic-acid content” of foods is a tricky thing at best. One has to look at such listings with an understanding that they are likely to be only broad-brush indicators–what is relatively high, what is relatively low–not exact, reliable numbers.

When you boil spinach or any oxalate containing food the hot water leaches out some of the oxalate. If you throw the water away, rather than making it a part of soup, for instance, you will have reduced how much oxalate you eat. (I personally prefer to drink extra water and eat the oxalate as well as other nutrients leached out in boiling.)

As an aside, the percentage of oxalate absorption varies markedly, from 1% for rhubarb and spinach to 22% for tea. Generally absorption was higher at low doses/content. The average English person consumes 70 to 150 mg. of oxalates a day, due in large part to their love of tea.

Two final thoughts on Indian Spinach/Lamb’s Quarters and oxalates: just as when you take aspirin or Ibuprofen you must drink a lot of water should drink water with high oxalate foods. With that, they can be some of your best friends. And second, taking Milk Thistle helps protect your kidneys and liver, which is always a good idea.

Indian Spinach seedlings are very small. I enlarged the picture so that you can see what the leaves look like.

Due to the large number of seeds produced by Indian Spinach plants, seedlings in the wild often appear as a velvety ground cover.

The seedlings are easy to confuse with Moss Rose seedlings, except the Moss Rose has three little leaves.

Within a few days to a week the seedlings develop leaves characteristic of Indian Spinach.

It’s a day or two from this stage that I “thin” my Indian Spinach plants… for lunch.

3/16/2014 ~ There may not have been enough light, or heat. Or, Indian Spinach wants an outside environment and won’t settle for anything less wild. That is to say, plants as thin as strands of hair emerged, grew tall, and died.

Article Name
Indian Spinach
Description
Indian Spinach, also called Lamb's Quarters and Wild Spinach, is a plant that by any of its names will taste as sweet. And, it's likely growing in your yard
Author
Karen Kline
Publisher Name
Health Boundaries
Publisher Logo