One of the things that makes a garden exciting is the unexpected life forms that appear. Butterflies aren’t completely unexpected, of course, but if you’re feeling down, go outside, and if a huge yellow swallowtail almost lands on you, it can be an emotional game changer for your day. At least, that’s how it works for me. 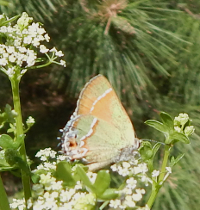 7/15/2014 ~ There was the tiniest butterfly on my celery flowers yesterday. In real life it looked green and blended in with the flowers and leaves so that it was impossible to see in my viewfinder. I took the picture using Blind Faith.

I don’t know if it was eating from the flowers, or laying eggs.

Usually I add flowering celery stalks to my brown rice, but since I watched the butterfly I have been afraid to take stalks from the area where it spent most of its time. My fear is that if I cooked with them I might be keeping the butterfly from having progeny.

I tried to identify the butterfly, with little success. A butterfly identification page was interesting, offering pictures of many different butterflies. Read more.

3/13/07  This is my favorite kind of butterfly. I don’t know if it’s a Mourning Cloak or a Swallowtail Spicebrush. It’s the same size as the yellow swallowtails, so I’ve thought it, too, was a swallowtail, until I tried to identify it and saw the Mourning Cloak , which looks quite similar. I took the picture last fall. The flower-like things are young morning glory seed pods.

I’m posting the picture today b/c when I was outside this morning there were two of them ~~ they looked really happy with each other. I wish I had a picture of the two flying playfully together.

There was a chocolate colored caterpillar, certainly as big as my little finger, eating one of my grape vines last year. I should have taken its picture ~ it was rather spectacular.

I’m pretty sure it was related to these. Or, I like to think so.

There’s a special kind of plant these butterflies are said to like, lovage, and I have them. But they aren’t up yet. Be that as it may, when I took the chocolate colored caterpillar some lovage leaves, it appeared to prefer grape leaves. Since my grapes have not fruited in all the years I’ve had them, I was happy to see the plants finally being of some use.

6/21/2014 ~ If only I had a video camera I could have taken a video of this beautiful swallowtail flying over my deck. Instead I had to wait for it to alight on a flower, and that was rather far away, so its image is not as large as I’d like.

9/1/08 ~ Here is a Katydid on a fall, fading grape leave. It’s missing one leg, so I guess it’s had a struggle in its life. (I rather identified with it.)

It could be one that hatched from eggs I found on twigs in my big pot last winter. I had brought the pot in, but after I saw the eggs I took it back outside for fear that the abnormal temperature inside, in comparison to outside, would cause them to hatch before there was anything to eat.

9/14/08 ~ I saw a fly that was so large I thought at first it was a huge grasshopper. When it flew it was the size of a hummingbird, but it was black, looked like an armoured attack machine, and was carrying a bee, clearly intent on eating it.

The Google picture at left of a Robber Fly doesn’t show how menacing the insect in my garden looked, but that’s what it was.

Apparently Robber Flies eat spiders, and two of my best ones are missing, as well as small snakes and lizards. I didn’t have small snakes or lizards.