In December 1947 Allan B. Kline of Iowa was elected to succeed Edward A. O’Neal of Alabama as president of the American Farm Bureau Federation. He heads an organization representing 1,200,000 farm families throughout the United States–a federation which Fortune in 1944 called “quite the best lobby in the business,” and which has a quasi-governmental connection with the Department of Agriculture county agent service.

Born in Nebraska in 1895, Allan Blair Kline is the son of Charles Elmer and Mary Elizabeth (Allen) Kline. His mother’s family had come to northeastern Nebraska from New York, and his father’s, to Ohio from Pennsylvania; his paternal grandfather made the trek from Ohio to Nebraska in a covered wagon. Reared on the family farm, Allan attended public schools in the neighboring towns of Dakota and South Sioux City. After his graduation in 1910 the fifteen-year-old boy entered Morningside College in Sioux City, Iowa where he majored in German and minored in English and philosophy. “It was always my intention to farm,” Kline said in 1948, “but it also had seemed wise to get some education before taking up the technical work in agriculture.” He continued to work on his father’s farm during week ends and during vacations of his five-year attendance at Morningside.

Graduated with honors in the spring of 1915, the new holder of the B.A. Degree returned to school in the fall of 1917, this time as a student of animal husbandry at Iowa State College. There he sang in the glee club and was elected to membership in the agricultural honor society, Gamma Sigma Delta. Kline’s studies were interrupted in World War I by a year of war service with the Sixty-first Infantry as a sergeant in the Medical Corps; but he returned to classes in the fall of 1919 and was granted his B.S. degree at the end of the scholastic year. Then, in 1920, Kline was married to Gladys Remer, and he began farming for himself in Benton county, Iowa, near Vinton. According to Marquis W. Childs, Kline made his way first as a tenant farmer, and then obtained ownership of the farm he operated.

Kline specialized in hog raising, putting as much as one-third of his acreage into hog pasture and fattening as many as one thousand pigs each year. The soil of the farm, which in 1948 consists of 560 acres, was not highly productive, says a Farm Bureau release, but heavy applications of limestone and some phosphorus, together with the practice of growing large acreages of legumes, raised the crop yields “amazingly.” During the depression when he and most other farmers financial difficulties, Kline decided to build tennis courts and a swimming pool on his farm, using family labor and a neighbor’s scraper. The water which is pumped into the pool overflows into a livestock watering trough. These facilities, to which a string of riding horses were later added, made the Kline farm the recreation center of the neighborhood. 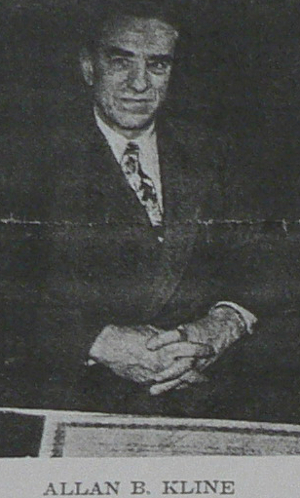 Through the years the Iowan took an active part in Farm Bureau programs: he served for four years as township director, ten years as president of the Benton County Farm Bureau, and rose to become a member of the board of the Iowa Farm Bureau Federation. In 1947 he was voted the title of “Master Farmer” by a committee representing the Department of Agriculture, the State agricultural school, the farm press, and farmers. The title, sponsored in Iowa by Wallace’s Farmer and Iowa Homestead, is awarded for skill and success in farming and for community-building spirit. In 1945, similarly, Kline was named an honorary “Master Swine Grower” by a committee sponsored by radio station WHO.

About 1941, after serving as vice-president of the Iowa federation, Kline moved to Des Moines to take up his work as president, a post he held until he moved on to national activities four years later. In 1944 the Iowan was sent to Great Britain for two months under the auspices of the Office of War Information, to tell British audiences about the farm population of the United States, particularly the Middle West, and to describe the war effort. The next year Kline was a consultant at the San Francisco conference at which the United Nations organization was set up. In 1946, as vice president of theAmerican Farm Bureau Federation and “Ed O’Neal’s right hand man,” he attended the organization meeting of the International Federation of Agricultural Producers in London. A year later Kline went to the Netherland for the formal opening of the organization, of which he is chairman of the policy committee. While abroad he toured German and other Western European countries.

Appearing before a Senate Agriculture subcommittee hearing in the Middle West in 1947, Kline “talked with such knowledge and ease on world affairs,” reported columnist Childs, “that chairman George Aiken of Vermont remarked he did not sound like a dirt farmer. But Kline established his pedigree.” Childs described him as “one of the most exceptional farm leaders in the country . . . aware that farming is only a segment of the national economy. He knows that the farmer cannot be prosperous for long unless the nation and the world are prosperous.” Later that year, when the Farm Bureau Federation’s twenty-ninth annual convention elected Allan Kline to succeed President O’Neal, Time wrote, “An enthusiastic student of philosophy, economics, and history . . . Kline believes in a relatively low level of parity and a thriving foreign trade as the basis for continuing farm prosperity.” (“Parity” is the ratio of farm product prices to industrial prices which the Government is required by law to maintain; strictly defined, it is the economic basis for computing agricultural prices so that they will be equal, in the matter of purchasing power, to the prices prevailing in 1909-14, when they were at their highest level.

The presidency of the American Farm Bureau Federation, a $15,000-a-year post, requires Kline to live in Chicago, to spend much time in Washington, to travel throughout the United States and to make visits abroad. His duties, in Kline’s words, “are primarily to carry out programs adopted by the official delegate body and subject to board of directors interpretation. The job involves the responsibility of leadership with various States, understanding national problems of all sorts. It also involves the duty of exercising influence with other groups to get acceptance of ideas. This covers agricultural policies primarily but, also, more general matters, political, social, and economic, domestic and international.” In January 1948 Kline filed a statement with the House Ways and Means Committee opposing material reductions in the income tax, but advocating the extension of community-property benefits to all married couples and the elimination of excise taxes on transportation and communications. At the National Farm Institute meeting in Des Moines that February, he stated: “The farmers are interested in leveling off the spiral and stopping inflation all around.” And he is said to have summed up his fellow Iowans’ viewpoint when he said that European recovery, not American relief for Europe, was the necessity – “We can’t feed Europe; Europe has got to feed Europe.” With other leaders of farm organizations, Kline in July 1948 declared his support of the International Wheat Agreement, a measure seeking stabilization of world grain markets through the medium of quotas on exports and establishment of price ranges. When the possibility of rationing arose during the 1948 election campaign, Kline remarked at the Kansas Farm Bureau convention that meat rationing is “a cruel delusion and a step toward worthless money.” A subsequent announcement by the Soviet Government of a fifteen-year conservation program led Kline to observe, “The record of the American farmer proves that greater conservation can be attained only through the minimum of centralized control.” Kline is the author of “What the Farmers Want,” an article in the September issue of the Annals of the American Academy of Political and Social Science.

At the annual convention of the American Farm Bureau Federation held in Atlantic City in mid-December 1948, Kline, an advocate of flexible agricultural support prices, came into opposition with the cotton and tobacco bloc of the organization, which was in favor of high parities. Before a vote was taken, Kline stated in an interview with a Christian Science Monitor reporter: “I believe that the plan of flexible price supports providing for a minimum of 60 per cent and a maximum of 90 per cent, in preference to the continuation of rigid supports at 90 per cent of parity as they now stand for the basic crops, will be reaffirmed by the convention this year.” Since the vote was almost a deadlock, with a one-ballot margin, the matter was passed to the group’s board of directors for consideration.

“Deliberate, shrewd, shaggy-browed” Allan B. Kline stands five feet ten and a half inches tall, weighs 180 pounds. One reporter described the gray-eyed, brown-haired farm leader as “a big man, well groomed, quick-thinking . . . known among farm people as both a person of action and a thinker.” He is a trustee of the National Planning Association, a member of the Des Moines Foreign Relations Committee, secretary-treasurer of the Iowa Council on Co-operation, and has appeared as an expert on the University of Chicago Round Table broadcasts. He was a member of the executive committee of the National Health Assembly in 1948. In politics he is an independent
Republican; in religion, a Presbyterian. The Kline farm is now operated by his son Robert Allan; the other son, Charles Elmer, lives in Des Moines, and the married daughter, Winnifred Lois, in Spokane. Kline is described as abstemious in his habits: for several years he has not eaten breakfast, and he gave up smoking entirely when he decided that he was smoking too much. According to associates, Kline reads exceptionally fast and makes hundreds of speeches a year without the use of notes. A bass-baritone, he is fond of singing. When he packs his bag for travel, the farm leader takes along a tennis racket. 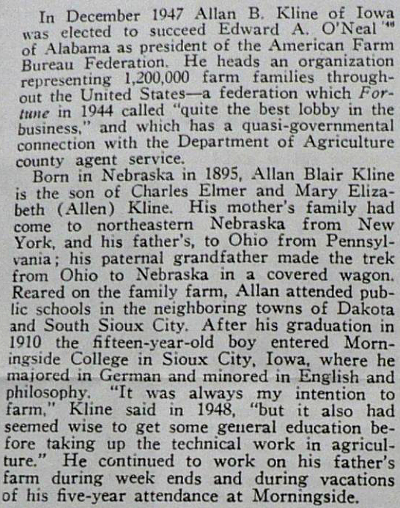 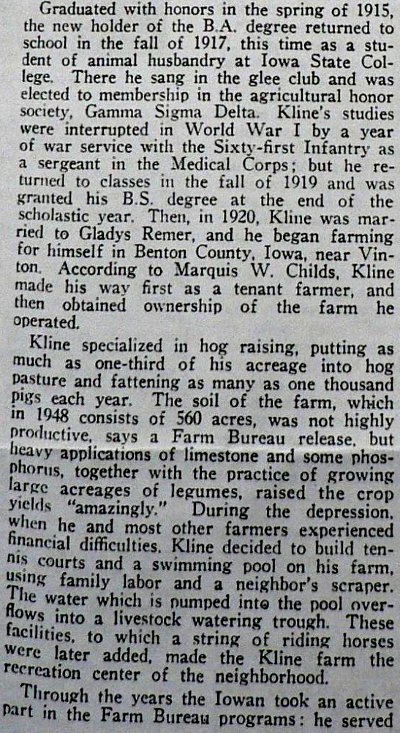 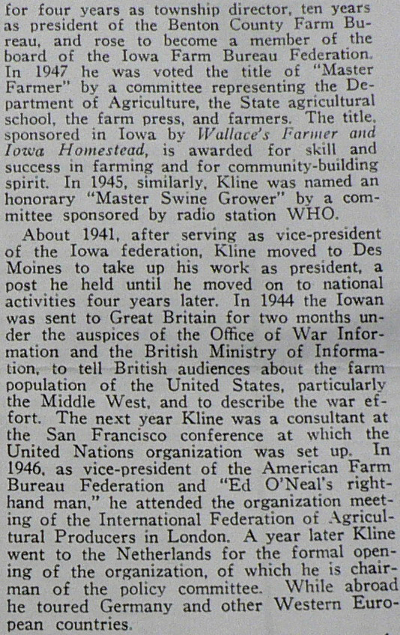 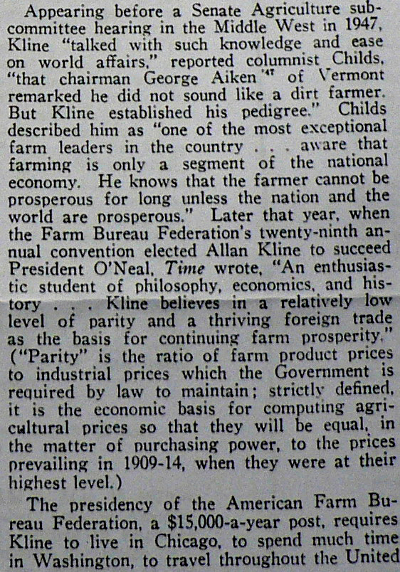 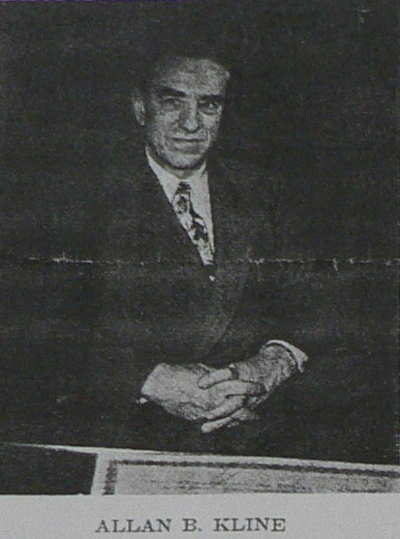 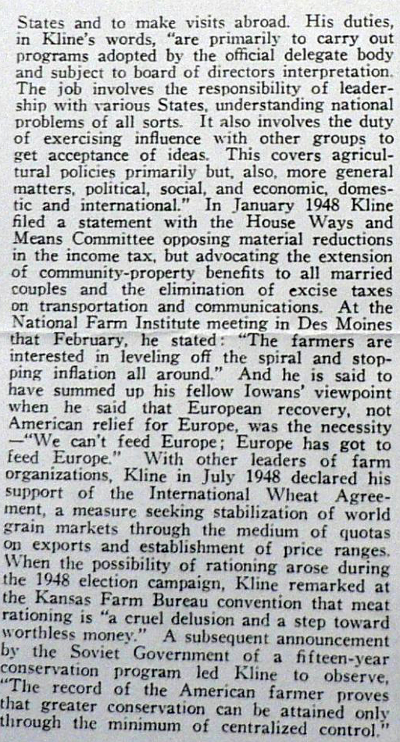