9/2/2006 ~ Mushrooms are an after-the-autumn-rain kind of thing. In fact, one description of when you are most likely to find mushrooms said, “after a thunderstorm.”

Following a particularly loud thunderstorm I noticed a discarded paper plate in my garden, clearly thrown over the fence, or blown over it. When I went to pick up the trash, I discovered that it wasn’t a paper plate, but a mushroom.

When I saw it for what it was, it looked delicious and I badly wanted to fry it up. But, that didn’t seem wise.

Instead I went to a mushroom forum and showed them my pictures. I was sure they’d tell me to cook it up and enjoy…

But, it turns out that some big white mushrooms are the most deadly mushrooms of all. So, I had to do a spore print.

When the spores were chocolate brown, I was on the right track to having an edible mushroom. The fact that the gills don’t attach straight to the stem is another characteristic of this edible mushroom, which is an Agaric bitorquis. But, by now my wonderfully lovely mushroom had spoiled.

This is the Mushroom Forum thread about the mushroom I found: http://www.shroomery.org/forums

3/30/2007 ~~Totally beautiful mushrooms. I wish I’d cut them off instead of pulling them up, because there were more little mushrooms around the base of the stems.

I just cannot tell you how happy this makes me, and how sure I am that the judge who foreclosed my condo without giving me due process is not very important in the full measure of things.

Aren’t the wild mushrooms from my garden beautiful? I’ve got to go thank the forum people who helped me identify them. The mushrooms are Agaric bitorquis. They are considered “Choice” among edible mushrooms. 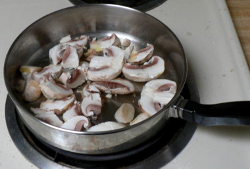 Without the help from the forum I wouldn’t have been able to have them for lunch.

8/28/2014 ~ Happiness! one of these mushrooms, my Most Favorites, came up in the pot with my fig. I could hardly believe it, but when I picked it the characteristics were the same. And, since there aren’t many bugs in the pot, the mushroom is in superb condition. I just wish I’d taken a picture before picking.

Shortly thereafter I saw Portobello mushrooms to grow in the house.  I had to order them! 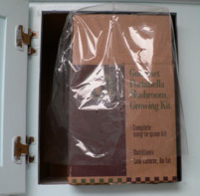 The tiny mushrooms have just come up and are darling, if I do say so myself. This picture is of one of the many groups of little Portobellos. It looks a little cloud-like as well as cloudy because I took the picture through the plastic tent. But, aren’t they cute? My mouth is watering. Seriously. 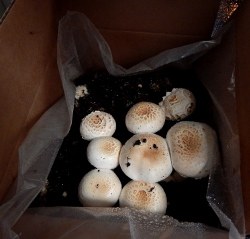 2/7/2015 ~ Boy! have my mushrooms grown since yesterday! Maybe it’s because it was warmer last night, or maybe they were saving up for a growth spurt. They are at least 4 times bigger than they were yesterday.

It was rather costly to buy a mushroom kit, but when I did it was because Wells Fargo’s foreclosure threats were dampening my enthusiasm for life. I didn’t want to become one of the 253% increase in suicides among those in foreclosure, so… I ordered a mushroom kit. And, it’s been fun to watch. I’m glad I bought it.

2/11/2015 ~ I worried about not being able to eat all of them when they appeared “ripe”. Turns out they were only beginning to grow. Today I had one that was easily 5 inches across. It was delicious. Prior to putting it in olive oil to lightly fry, I tapped the mushroom cap. holding it over a part of the kit’s growing medium where there weren’t any mushrooms. Where the spores fell on my hand, they were the same chocolate color as those of my Agaricus Bitorquis growing in my garden.

So, I wonder if I add whatever it is mushrooms like to eat to the kit, will more mushrooms keep growing as long as I let them get large enough to produce spores? That sure would be great!

8/25/08 — I was pretty surprised when I saw this in my garden. I was going to go to a mushroom forum to ask what kind of mushroom it is, but managed to find it in my mushroom book, and low and behold, it belongs, appropriately enough, to the genus Phallus.

At first I hoped it was a morel and sprayed it with the hose to wash the black stuff at the bottom of the cap off. Cleaned up it did look like a morel and its odor, described as “fetid”, actually smelled sort of sweetly perfume-y when I picked it. Still, all my efforts could not change it from a stinkhorn into a morel.