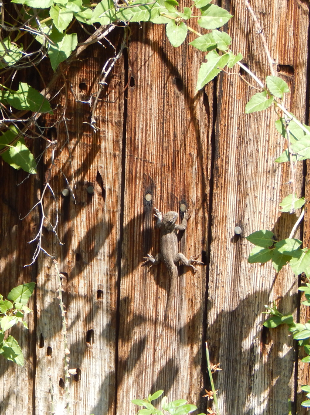 7/21/2014 ~ When I first saw her/him I saw only the end of a tail, quickly disappearing up into the vine. So, I thought it was mostly likely a mouse. I see quite a few mice, while I seldom see lizards.

I love seeing lizards because it always seems as if they bring good luck.

I had thought I wasn’t seeing lizards in my garden because I have weeper hose that adds moisture, whereas previously my garden was a desert as they come.

But, it looks as if this lizard is either living in my garden or pretty close because now that I know where to look I’ve seen her/him on other occasions.

It may well be a her, because of the rather fat midsection, as if she’s going to have babies.

Years ago my kitty caught a pregnant lizard, which made me very sad, and subsequently happy when my kitty released her and let her be.

There are other lizards with a snazzy, bright blueish-green line running along their sides. I had one of them rest against my food one day a few years ago when it apparently saw me as just another part of the garden. I loved it.