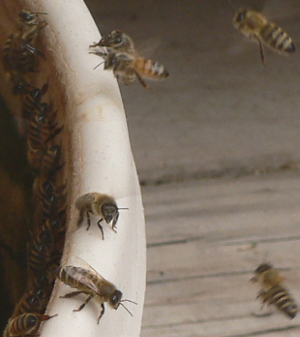 7/13/2014 ~ Something has happened to the bees. There are three or four drinking now, at most, where before there were nearly twenty at a time. I wanted to show them to you, so I bought a small video camera that would let you listen to the lovely buzzing as well as see the bees, but now most of the bees are gone.

I wonder if this is the result of RoundUp use nearby…

6/21/2014 ~ I knew that wasps come to my deck for a drink of water fairly frequently, but I had no idea that bees need water during the day.

At least, not until I noticed quite a loud buzzing and a constant wave of bees coming to drink from the tray under my fig tree.

There are trays of water under all the pots of vegetables on my deck, but they choose the fig’s tray.

I would guess that’s because the fig has been in its pot for years, so there’s no longer “compost tea” in the tray after a watering.

They don’t appear to like it if I fill the try to the brim. They appear to like to walk down the interior side of the tray and then drink. So, I’m careful to keep a margin for them to use for their walk.

I’m really tempted to buy a video camera so that I can show you how frequently they fly in and out. And, to capture the buzzing. It sounds like a healthy garden years ago, before the advent and popularity of RoundUp.

6/22/2014 ~ There seem to be nearly twice as many bees today. I’m glad they don’t mind me sitting a foot away from them when I’m watering, morning and evening. They happily fly around me as I navigate with my rolling walker between my pots of vegetables.

I wonder if there are more bees because they’re newly hatching.

I took some pictures of bees that appeared to be laying eggs in the pot with my strawberry plants. Bees laying eggs ~ See pictures and read description.

National Geographic video of woman dancing with 12,000 bees on her body. View video.

2/21/07  The door blew off my Mason Bee home during the winter. I just found it the other day. I wasn’t able to walk very well toward the end of fall, so I hadn’t been outside in quite a long time. When I saw all the straws exposed, the straws are made out of cardboard and are larger than soda straws, I wondered if they had been ruined.

Surprisingly, they looked fine except for grass that seemed to have blown into several of them. By whacking the straws on the side of a crock pot that had broken in the cold, I was able to empty the straws quite easily, except for one.

One was so tightly full of grass and bits of weed that I had to whack it over and over again, growing ever more amazed that the wind could have driven the weeds into the corkscrew shapes that came out.

But then a shape came out that was like a flying creature of some sort that was in a cocoon. My heart sank. I had been told that the bees would not use my house last year because I put it up too late. Yet here was this poor cocoon… not really a cocoon, more like a translucent envelope around the shape of a flying insect.

If shaking a baby hurts it, then all the whacking must have been horrible for the poor bee, if it is a bee. I put it back into the straw and put the door back on. Gosh, I felt so bad, and still do. I bet the mother bee put all the grass and weeds inside the straws for her baby, to keep it warm. Maybe it would have been a queen Mason Bee and I would have had lots of wonderful bees in my garden.

I hope I haven’t jinxed my Mason Bee homes.

April 14, 2008 ~ There were many bees in my pear tree today. Bees are more difficult to photograph than I had thought. Treating them as if they were birds doesn’t quite work. As you can see, the bee in the photo at right is not as obvious as a bird would be, and this is with the image showing at 100%.

Last year I felt lucky if I saw more than one bee in an hour. Today there were dozens at one time in my pear tree. 🙂

I even planted borage for them last year ~ it’s touted as their favorite flower. But they hardly paid any attention to it, whereas they nuzzled into the dandelions in a true display of love. I found one little one that must have been out too late and been overtaken by the cold of the night or sheer exhaustion, because it was curled up, asleep on a dandelion in the morning.

April 15, 2008 ~ Well, I did better today. I took the pictures earlier so that the wall behind the pear tree wasn’t glaring in the sunlight and I used the zoom.

So, today I can find the bees in the pictures.

I was going to read about changing the shutter speed, but for some reason I got sidetracked.

I think if I use a faster shutter speed the bees might actually be as clear as the flowers, not that the flowers in this picture are that clear. In some they are brilliantly clear — but there’s no picture where the honey bees are clear.

I have some shots of mason bees that are really clear, so they must be a lot slower.

Anyway, this was lovely. The sound of all the bees around me when I was standing amid the branches was lovely.

Article Name
Pollinating Bees
Description
I had no idea that bees need water during the day, at least not until I noticed a buzzing and constant wave of bees coming to drink from the tray under my fig
Author
Karen Kline
Publisher Name
Health Boundaries
Publisher Logo