Mockingbirds mimic an amazing array of sounds. I love “my” mockingbird. The varied songs it sings bring joy to my living room when the door is open. And, the mockingbird is all the more lovable, to me, for its unassuming grey feathers.

For quite a long time I believed it was a mockingbird because it brought the sounds of a war game to my garden. Suddenly there were missiles whistling through the air, followed by the sounds of explosions. This was not my favorite, but it convinced me that if mockingbirds mimic, then the “singer” had got to be a mockingbird.

Just to be sure, I played Dvorak’s New World Symphony, quite loud for several days running. I expected the mimicking bird to go classical. The mockingbird, however, was not the least bit impressed with Dvorak, so missiles continued to whistle then explode in my garden.

Here’s a link to a mockingbird singing somewhat like my mockingbird – on a day without war games. The sounds that particularly make me smile are the ones that look like El El El on the graph above. Those and also the ones that sound as if it’s literally singing, “tweet tweet”.

For some reason I thought the mockingbird that was singing such dramatic sounds would have dramatic coloring. I kept looking for a brightly colored bird, something like a little parrot. After all, I had no idea what the bird whose singing kept capturing my attention would look like.

The only bird I saw and didn’t know the name of was a grey bird with a long, curved beak. Surely, I thought, that can’t be the singer that enlivens my garden.

I pored through pictures of mockingbirds on various sites, without finding a single picture that looked exactly like my mockingbird. Though, in the beginning I’d rather fastened on the bird’s bright yellow eyes, the one time I saw it up close. 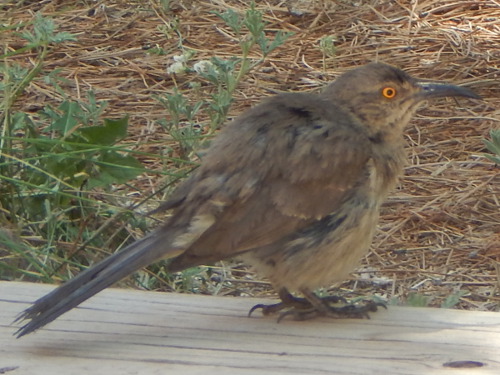 I thought it looked so fearsome. It boggled my mind that with those eyes it sang such lovely songs. Just to be clear, in the image above the mockingbird had just enjoyed a shower under the hose set on “flat” to spray my Ponderosa Pine. The picture is a bit blurry because it kept shaking water off its feathers.

I’ve no idea why it’s tail feathers look a bit ragged. It could be the intruder animal in my garden attacked it. I described the animal in a letter to a friend when I was worried about not having seen or heard a mockingbird in several days.

Speaking of my garden, I found a man to help me. He fixed my fence and cut down the huge “branch/trunk” of my pear tree that used to knock violently against my house in high winds. He also takes me to Lowe’s for plants.

Last week when we came back from Lowe’s I came out to the garden a bit after him. When I arrived he announced that there had been a dog in my garden. My eyes widened… I could not imagine how a dog got in to my fenced garden. He said, “I don’t know how it got in your fence.” I said, “Maybe it was a ground squirrel.” He replied, “No, it was a medium sized dog.” I was major puzzled. He said it had been at the back of the garden and had run around to the front of the garden. He paused, and said, “Maybe it was a big cat.”

Which reminded me that when I’d asked him if he had a dog he’d said, “Yes.” When asked what kind, he’d said, “A beige one.’ I just love that. It still makes me chuckle.

I remembered that there is, in fact, a very large beige cat that frequents my garden, despite me being as inhospitable as possible… I try to protect the birds. I fear I may not have adequately protected the mocking birds.

Which brings me to the mysterious and huge plant in my kitchen. It appeared in a pot where my overwintering tomatoes had recently died for want of direct sunlight.

Because it came out of the ground with a really thick stem I thought it might be ginger from a root I’d discarded into the pot during my ginger beer making phase. But, I couldn’t find an image of ginger that looked at all like it.

Then, it began to flower. At the center of each little flower was a round, green ball. Ah, I thought, maybe it’s Allspice. I’d ordered whole Allspice and had been amazed at the size of some of the kubabas. My Polish grandmother called them kubabas and used them to enhance chicken dishes. Which I do today.

But, as the flowers matured the green balls began to look more the shape of little pumpkins. 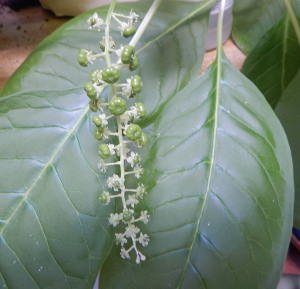 I looked at random images of white flowers in panicles, via Google images, before I found a plant identification site. There were 291 species represented in pictures. At first I was daunted. But then I began scrolling quickly through the images till all of a sudden I came upon American Pokeweed. That was it, I was sure.

American pokeweed has been used as food and medicine, although it can be very poisonous. The young leaves can be eaten after lengthy boiling in two changes of water to leach out the toxins. A wide variety of chemicals have been isolated from pokeweed that have antiviral and other medicinal properties, and Native Americans have used the plant in herbal medicine. The berries are poisonous to humans but have been used to make dye, and are a favored food of migrating songbirds.

Songbirds!!! I’m thinking the mockingbird will love this, if only I can transplant it outside.

I’m a little unclear on how I’m going to relocate it outside, since it is rather large at this point, and it looks as if the stem may be brittle. Still, it’s a perennial, plus with all those seeds it looks as if it has a strong intention to live.

Several sites described it as highly poisonous, “Eating its berries can kill you. Eating its stem can kill you. Etc.” Then, to my surprise, other sites offered canned leaves to use in salads, and one site said the berries make really good pies. Right. I’m just not that adventurous.

Before I try to relocate it outside in my garden, I need to figure out where in my garden it will get some shade and where the ground will be somewhat moist. Plus, I want it where I can see the mockingbirds enjoying the berries.