7/29/2017 ~ I have finally had some success stopping root rot from killing my little avocado which has consistently flowered in spring. But, the flowers have always fallen, taking my spirits down with them.

Last year I thought protecting the little avocado from too much sun might be a good idea. I kept it on the back part of my deck where there’s intense sunlight only half the day. The little tree did not grow much, if at all. So this year I have it on the sunniest part of the deck and I was hopeful until I saw the tell tale signs of root rot: the top of the little tree kept turning brown, and the brown crept down as I kept cutting off the blackened bits.

I had put gypsum in the potting soil, so I had not expected root rot. But, maybe last summer when there wasn’t enough sunlight to sustain a lot of healthy growth the avocado didn’t use water efficiently enough to protect its roots from rot.

I decided to take action. I ladled gypsum onto the soil surrounding the avocado’s trunk, then dug the gypsum in a bit and watered. The watering caused a gray foam as the gypsum dissolved, or whatever it does, and sank deeply into the soil. Then, I hoped…

It’s been two weeks and the descending blackening of the avocado trunk has stopped. The little branch of leaves next to the blackened bit is still alive. I’m wondering if I should add more gypsum, as a second treatment. In any case, this is the First Time I have seen root rot stopped. I should mention that I let the soil get really dry after I watered in the gypsum.

9/16/2016 ~The medium avocado, shown below, kept growing new leaves, further and further down its trunk.  But blackening from above always caught up. Today, when the last pair of hopeful little leaves were gone, and the blackening had reached further down by some inches, I decided to pull up the avocado and re-appropriate the pot.

What I pulled up was not what I expected. There was no longer a mass of rotting roots, like when the avocado arrived. Back then I should have sheered off roots that didn’t look healthy, rather than relying on gravity and the falling away of a huge part of the root system.

There were some thick, brown roots that looked original in that they were bent to fit the pot originally inhabited by the avocado, but quite impressively there were a few white, healthy-looking threads of roots very near the very top of the root part of the stem. I was amazed.

I had the avocado stem in the trash, when I began to wonder if the stem could recreate leaves if there were no brown, dead roots holding it back, so I pruned off all the brown roots till there were only roots that looked woody and alive on the inside, and the fine white roots that looked totally new.

I found an 8 inch clay pot, got out my gypsom and mycorrhizae and planted the stem. Since life is often miraculous, the avocado just might live now that the dead and dying roots have been removed.

6/25/2016 ~ Because over watering killed three earlier avocados, I watered the new ones once every three weeks during the winter: each the same amount. The little one thrived, the medium one, in the 9/6/2015 picture, had a lot of leaves turn brown before I noticed the problem, and the large one suffered even more.

Come spring, the medium avocado, that had arrived with root rot, had flowers, so I took it and the large one outside, bringing them in at night. The large one lost nearly all its leaves and I feared I’d killed it.

The medium avocado began to have the tips of its branches blacken, then shrivel. I didn’t know if I should cut off the branches whose ends were dead, or if I should let the plant somehow choose on its own. In the end, I opted for waiting. But, when the shriveled parts of branches seemed to be creeping toward the healthier looking parts of the plant I cut the shriveled black parts off. In total, there were only six leaves left on the plant, and one of them was blown off the other day.

I kept wishing the avocado would survive. Then I noticed that the black shriveling effect had stopped, there were a few tiny leaf buds on the main stem, and it no longer had black spots. I’m thinking that the sun’s radiation is to thank for that. Then, the blackening began again. In August tried washing in gypsum to kill the root rot. We’ll see.

Meanwhile, the big avocado began to look quite magnificent, with lots of new leaves, and then more new leaves with a bit of bronze coloring to them. It didn’t do any flowers, but it’s looking so healthy I’m hopeful for next year.

9/6/2015 ~The avocados I ordered from Fast Growing Trees arrived with the larger one showing black spots on its stem and curled leaves. I took pictures, called and sent the pictures. The tree is going to be replaced.

But, the poor thing. In taking pictures of it I began to form an attachment and wish there was something I could do to stop its demise.

First of all, black spots on the stem killed my previous avocados, making me want to give up on growing avocados. But, when I tried one more time with strawberries, I was rewarded big time. So I hope avocados do the same.

Second, black spots on avocado stems are a symptom of diseased roots from bacteria in waterlogged soil. I’m inclined to believe that’s true because my now deceased avocados were in the wrong kind of soil. I had thought that they would be fine given that the sun here in the high desert is scorching. When I had the avocados in less dense soil their leaves began drooping just a few hours after watering.

My avocados did much better in the denser soil, until they were inside for the winter and the temperature dropped after the vinyl covering the bottom of my kitchen skylight came off. Suddenly it was 55* in here, rather than 60*. It wasn’t long before the avocado stems began to blacken.

I tried repotting. It might have worked except that to counteract the previous ever wet soil, I watered them only once in three days. When the black returned, and it did, the plants died a few days later. Hence, my avocado tree order placed with Fast Growing Trees.

Because Logee’s transplanting wisdom advises waiting several days after plants have been shipped to relocate them, I haven’t tried transplanting the new avocados… yet. Thus, bacteria infested roots remain. 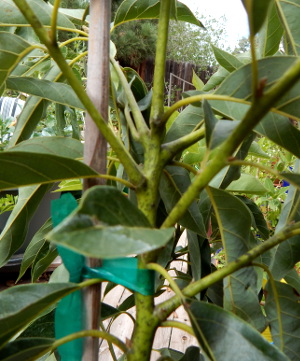 But… does that mean the tree is doomed? My experience says yes, but …

I wonder if the infrared and ultraviolet in sunshine might be able to aid the stems in regaining health, perhaps by reducing whatever the black is.

To put this to the test I’ve been placing the tree where sunshine hits and hopefully penetrates stems, and even the black spots. I have to sit with the tree when its in the sun so don’t I forget about it, resulting in it getting burned.

9/8/2015 ~ It may be foolhardy to think this avocado can ever lead a full, productive life. Maybe I should have cut it to bits and put the pieces in a far, disused part of my garden. But, in trying to give it a chance I’ve learned some important Avocado Dos and Don’ts.

For instance, watering my avocados with goldfish water during the winter is bad: avocados do not like ammonia.

Although there are some known “cures” for root rot, experts say the best bet is to plant avocados so that root rot doesn’t start in the first place. With this in mind, I’m planting the little avocado in best way possible this afternoon when the cactus soil I ordered arrives.

Tomorrow the gypsum I ordered will arrive. Adding gypsum to the soil of an avocado suffering root rot provides calcium which inhibits the infectious bacteria from multiplying. I’m not sure how much to add, since the article I’m going by deals with avocado trees grown commercially in the ground.

Apparently beneficial organisms help, too, though the article didn’t identify any of them by name. I’m guessing/hoping that mycorrhizae is one, given the mycelium’s “symbiotic association with the roots of plants.”

Basically, Mycorrihizae is a fungus that assists plant roots in absorbing minerals and water from the soil. It also defends plant roots from other fungi and nematodes. Meanwhile the plant provides carbohydrates to the fungus.

9/10/2015 ~ After my gypsum arrived yesterday I mixed a cup, per the directions, with Sun Gro Black Gold Cactus Mix, quite a lot of core and mycorrhizae. I put Orchid potting soil (with charcoal) at the bottom of a 7 gallon TubTrug then layered on the gypsum/cactus mix.

The hard part was going to be transferring the avocado from the nursery pot to the TubTrug, since the avocado was rather heavy. After cutting the sides of the nursery pot I tried lifting out the avocado, but it resisted. Then, to my surprise, a more than half of the avocado’s roots fell away. along with very wet soil. What was left was easy to lift into the new pot.

I’d read that root rot shows up as brown roots, so I took off brown roots that stuck out from the root ball of cream colored roots.

I was feeling quite hopeful even before I saw that what had fallen away from the avocado was a mass of brown roots.

I don’t know if the avocado will survive. According to articles I read, root rot can kill either very quickly, or very slowly.

I’m hoping that having removed the avocado from so much of its apparently rotted root, it will have a chance to survive and live a happy life, making good sized avocados, rather than the stunted kind associated with root rot.

If the avocado leaves stop being curled, that will be a good sign. Here’s hoping! 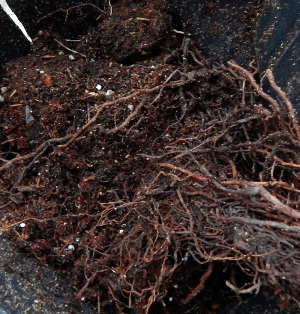