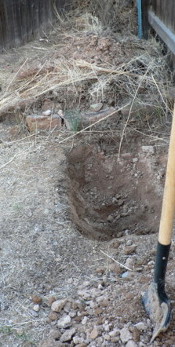 It’s my asparagus bed, in the making. (I ordered seeds, given how well the Bio Dome is working.)

And, it’s 12.5 feet more garden than I had before — This is a narrow, triangular corner of my garden that’s hard to do anything with; so I’ve used it as a compost area ever since I bought my home about 16 years ago.

I’ve dug the compost pile down, so it’s not as obvious as before. It used to start at the reddish rock just above the hole, so you can see I was giving it a lot of space.

2013 ~ My asparagus is still alive but I’ve only had one stalk then to now. Not enough water, I fear.

But now, when summer is past, there’s only one.

Not much of my garden is the way I pictured it. In June there was so much time ahead that it didn’t seem like a problem that I can do so little at one time. One shovelful, I thought, adds up over a few days. And in truth I got a lot done at the rate of one or two shovelfuls at a time.

The thing is, there were times I had trouble walking. So there were periods when I didn’t do even the small amount I was counting on.

I’ve been depressed, looking at my garden, and seeing how much it’s not what I had planned.

But when I focus on the zinnia I am thankful I planted it and it came up and flowered.

My grape, which looked dead for lack of water last year, isn’t. So maybe next year it will do grapes. (As of 2016, still no grapes.) 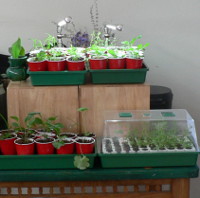 I might have appreciated a warning about what it’s like two months down the road from the happy, anticipatory days of planting in Bio Domes.

I was thinking, “Echinacea, delfinium, Irish moss, astilbe, pansy, foxglove, salvia blue queen and thyme (to start)” when I blithely got more Bio Domes and put seeds in about 180 cells. It was so exciting I completely overlooked the “180” part of it.

As they sprouted and I matched them to my layout map to see what was coming up first, they were flourishing, compact and so fun. But it soon became clear that my January indoor garden was crying out for more root room. At which point I opted for tallish, red, beverage cups… The 180 part of it struck me.

The wooden boxes, as an aside, are a wonderful way to hide all my extra sponges, my seed selection and my tools. (I have a few very handy plaster of Paris trowels that I use to get the little plants out of the white cells.)

I’ve transplanted a few of the perennials outside, and they are doing very well. But I don’t have the beds ready for all of these, so this is how my little planting table looks now. Maybe it’s messy, but it makes me smile.

Sometime later ~~ I decided to move the compost makings I was using to raise the level of the shady corner garden, dig a hole where they’d been, put them into it in layers with dirt, and build up the area above with dirt, steer manure and peat moss.

But I could only do three spadefuls before my muscles tighten, so this  took a bit long, but was worth while. (I was surprised to see that the leaves in the debris pile had already composted. The vines and twigs were not so quick.