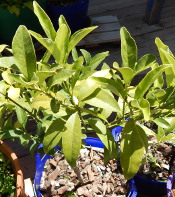 9/4/2016 ~ When I ordered MooPoo Tea I was sent complimentary Alfalfa Tea for my roses. But, I have only one rose. So, not to waste the Alfalfa Tea, I used it with all my deck plants. A lot of them were not happy about that.

It turns out that Alfalfa Tea is alkaline. By adding it to the soil I reduced the acidity. Plants that like acidity were decidedly unhappy.

So, which plants had yellowing leaves when I used Alfalfa Tea as a fertilizer for them?

9/9/2016 ~ Upon arrival I discovered that the “Organic Fruit and Citrus Fertilizer” contains bone meal.

Bone meal is worrying because bone meal has been linked to Bovine Spongiform encephalopathy or, Mad Cow. The critical element in bone meal is extremely small, but almost indestructible, particles known as prions. Research re bone meal and Mad Cow.

In a news magazine segment on telly years ago it was shown that meat with prions could be fried to a crisp without stopping the infectious prions.

Of course, mad cow is seldom diagnosed in humans. The thing is, though, that mad cow is a lot like Alzheimers which is rampant.

Protein can deform into prions

What is especially insidious about Jobe’s Organic Fruit and Citrus Fertilizer containing bone meal, is that prions are somewhat dormant to nonexistent in alkaline soil. On the other hand, in acidic soil, like that most suited to citrus, prions increase in number. This is because prions are deformed proteins and acidic soil tends to increase the deformity.

“Several researchers have discovered that prion’s deadly misshapen form is determined by exposure to low, acidic pH environments. In a healthy neutral or alkaline environment these proteins are just fine, happy and properly shaped. However, under low pH, acidic conditions all that changes. As pH goes down and acidity increases (red line in chart below), proteins get more and more distorted until at some point they can no longer recover their proper shape and are permanently now Prions — infectious proteins.” Read more.

Two hours later: I’ve removed the top inch to two inches of soil from my pots of citrus and guava that I had fertilized with Jobe’s Organic Fruit and Citrus Fertilizer. I put the “contaminated” soil around my rose which I water with alkalizing Alfalfa Tea.

Now I have to mix compost, perlite, coir and some used soil from a pot that grew carrots so that I can replace the soil I took out of the citrus pots.

Darn it. I really wish I had not used bone meal via the Jobe’s “Organic” Fruit and Citrus Fertilizer. Even though I was aware of prions and bone meal, I believed that not breathing prions in, kept me safe. The US government, says that, among other “authorities”. Once I read a bit more about prions, I discovered that breathing them in is only one way of being infected.

Researchers also found that plants can uptake prions from contaminated soil and transport them to different parts of the plant, which can act as a carrier of infectivity. This suggests that plants may play an important role in environmental prion contamination and the horizontal transmission of the disease. Grass plants can transport infectious prions