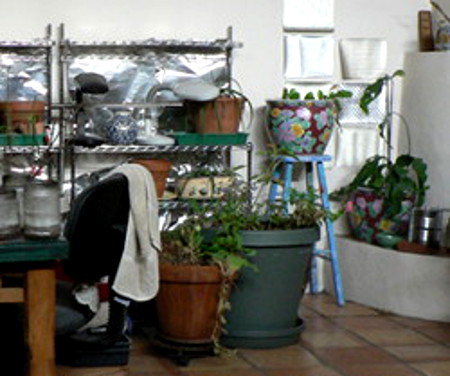 Tinfoil works in the garden so I tried it behind my plant shelves, which wasn’t ideal. It was, however, better than tinfoil on the walls which was rather, Aliens Beware!

I ordered Decorator reflective wallpaper samples ~ squares to the right in the picture. $250 minimum order, though.

Orca Grow Film to the rescue… I hope.

Orca Reflective Film was developed for use in hydroponics (growing plants in water). It’s highly reflective, using the crystalline structure of snowflakes. Think about how bright it is when there’s new snow.

Orca has a 99% Diffuse Surface: It’s microfiber structure creates even light distribution regardless of the angle at which the light hits it. The resulting “isotropic surface luminance” eliminates hot spots and the need to hang it perfectly flat. Sounds good to me! 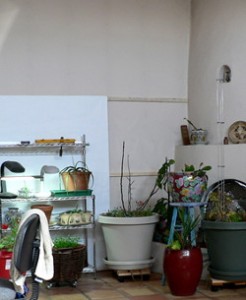 With an inch of air between Orca and the wall, Orca conserves heat. Or, so they say.

Here you can see some Orca Reflective Film Wall Covering busily reflecting light, as well as the furring strips used to separate the Orca from the outside wall, for its effective insulating quality.

Orca sure looks a LOT better than tinfoil! 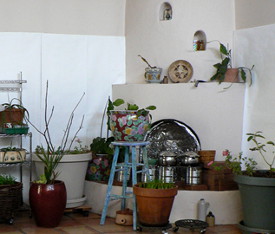 November 19, 2011 ~ At right is a photo I took around 8:30 a.m. I don’t have any full spectrum lights on because the sun isn’t yet high enough for my solar to provide the energy. The Orca reflects light from both walls now.

I think I’m going to cover the fireplace screen with Orca and move my pot of onions up onto the hearth bench. 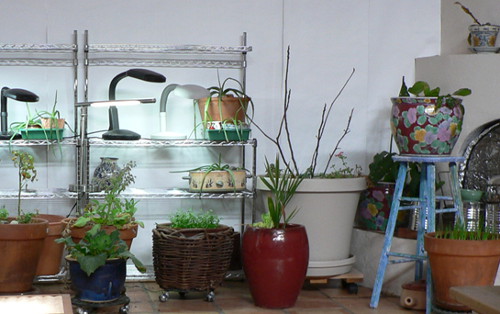 Okay, I’m totally enamoured. And, I think my plants love it as well.

Orca vs. Other Options

.
There is a vast amount of information available on the Orca site. 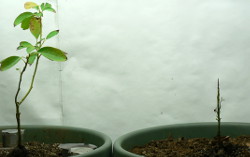 January 17, 2012 – Both avocados are under my new T5s and are transplanted into huge pots with clay at the bottom so water does not flow right out into the tray, leaving the top of the pot bone dry while the bottom is awash in stagnant water. I transplanted really carefully.

A full spectrum lamp fell on the avocado that grew from seed. The light burned the avocado’s leaves. Just when it recovered I planted celery safir around it because it was so small in the huge pot, but the celery’s aggressive roots nearly choked the little avocado to death, not to mention taking most of the water.

The little leaves branching out, bottom left, are its major hope. The larger leaves on the right appear to have died, perhaps of damping off. 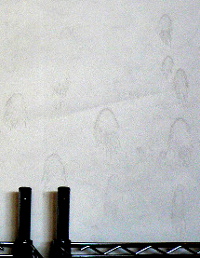 January 21, 2012 ~ Turns out an inch of airspace isn’t enough to keep condensation from forming jellyfish patterns on the Orca. They don’t happen in the bathroom where there’s three inches of airspace, which makes me conclude condensation creates them due to temperature difference between the outside wall and the Orca at room temperature. (Someone who isn’t heating with candles might not see these patterns, to which soot most likely contributes.) 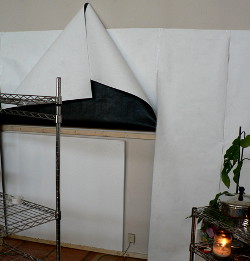 While the little marks aren’t big, as they multiply they reduce the effectiveness of the Orca… so… I’m having insulation slipped into the airspace. The insulation is $8 a sheet from Home Depot and is really easy to cut w/ a steak knife.

The insulation is slightly thicker than the furring strip so we didn’t staple it to the strip. The insulation seemed firmly in place simply because it’s so light and the Orca is stapled at top and bottom.

You can see one of my candles under a Farberware chef’s pan, happily creating heat in my living room.

My infrared thermometer batteries never arrived so I wasn’t able to study the difference the insulation made. Darn it! Oh well. On the other hand it was easy to see that it stopped the little jelly fish patterns from forming which was my main objective. Happiness!!! 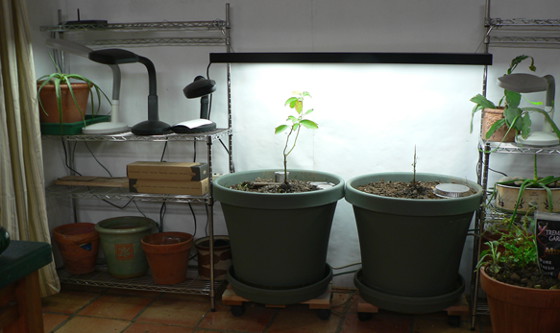 This is my T5 from Gardener’s Supply, my dark, navy blue velvet curtains replaced by Thermalogic insulated curtains in sage stripe and the Orca making a big splash of light!

Can I store heat from full spectrum lamps?

November 20, 2011 ~ I wonder if heat from my full spectrum lamps can be stored in the pots they shine light on.

11:30 a.m. My full spectrum lamps have heated their shades to about 86 degrees. The soil in the pots beneath the lights is about 48 degrees. A small tin can filled with clay and pennies (copper) with a clear plastic lid is 51.6 degrees with the soil around it 48 degrees. A tin can with crumpled tin foil, sprayed black, inside with a clear plastic lid was 51.6 degrees shortly after I sank it into the soil in the pot, but a few minutes later it’s temperature had dropped 1 degree. I would guess the soil absorbed the heat.

I have a similar sized pot of onions which I’m not going to try to heat using the full spectrum lights. It will be my control.

1:00 p.m. Not what I expected. The control pot is just as warm on its outside as my two pots testing methods of changing light into heat. Of the two pots, the pennies in dry clay have heated the soil around the tin can about 2 degrees more than the tin foil painted black in a tin can. I wonder if the control pot is warmer because it’s 6 feet further into my living room, and away from the French doors to my deck. 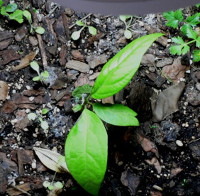 December 19, 2010 ~ My avocados and I are happy!
When I couldn’t find another Don Gillogly avocado to order I planted a seed from a grocery avocado with a small pit. The avocado seedling was larger but a full spectrum lamp fell and burned its early growth. On the top edges of the photo you can see my celery. The very small plants are lettuce. 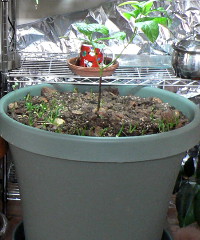 In this picture of my Don Gillogly from Parks ~~ you see its large pot. It looks happy under its full spectrum lamp. The grass-like plants around it are onions.

What amazes me is that the two huge pots have raised the temperature in here by about 10 degrees. The pots must hold the heat. And, the white lamps are as warm as the tins over my candles. The black lamps heat to about ten degrees warmer. The heat is a lovely bonus!

Avocados to the Rescue ~ Read more.