8/8/2018 ~ Yesterday when I took a break from fighting Wells Fargo scheduling a foreclosure sale of my home before the Appeals Court has even ruled on the foreclosure … I heard a knocking. It sounded like a woodpecker. I haven’t heard or seen a woodpecker for years.

I snapped lots of pictures, using my zoom. None of them are perfect because the woodpecker was partially hidden by ponderosa pine needles. And there was the fact it was moving its head the whole time. Still, I did get a picture. Happiness!!!

I felt like it was a good omen. I was feeling relatively hopeful, so maybe a kind of “Knock on wood!” message from the universe. 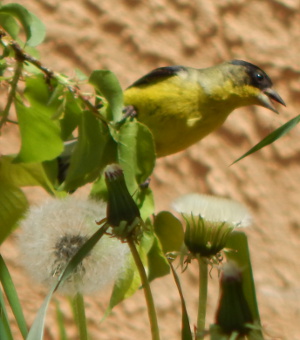 5/10/2015 ~ I love watching goldfinches eat dandelion seeds. If I were better at using my Nikon I could take a video of a goldfinch landing on a dandelion stem and riding it as it bows toward the earth.

Goldfinches especially love dandelion seeds just before they open up into globes.

Not many years ago goldfinches came in flocks. Now I’m happy to see a pair.

If you use RoundUp, you may not know that you are killing not only a source of food for songbirds, but also the birds themselves.

2/28/2008 ~ Luckily I have a camera with a zoom lens and could get a fairly good shot of this “large bird” when it sat on my fence for a surprisingly long time. Through my window the bird was too far away and small to identify, but with my camera and its zoom lens I could easily see, once I downloaded the images, that it’s a hawk.

I’ve often seen hawks circling overhead. I think they look for prey around the Rodeo Grounds and a large area with natural vegetation next to Rodeo Road, about two blocks from where I live. Their circles are large, so they aren’t in sight the whole of their circles.

This one must have wanted a breather.

10/18/2014 ~ I was in the kitchen making coffee when I heard a great flapping of wings. I looked into the living room, and there was a hawk, circling.

Unlike the hummingbird and female house finch that came in and fixated on the clerestory as the way out, which it isn’t, the hawk circled a second tme and went out the door.

Dynamite experience. I looked up hawks for any spiritual meaning and found, “When you have the hawk as a spirit animal, you may have an inclination towards using the power of vision and intuition in your daily life. The hawk totem provides wisdom about seeing situations from a higher perspective, using the power of observation, and focusing on the task at hand. It’s a good companion to develop spiritual awareness.” Read more.

10/2/2007 ~ Loud crash! Almost instantly another crash! Two little finches flew into my bedroom window. One lay on its back for a time, then jerked about worryingly. In the end it righted itself. The other had landed on its feet. Neither one appeared able to fly away.

I was afraid that one of the neighborhood cats would happen by, see the birds and decide it was feast time.

I thought that the finches were probably in shock from the impact. I hoped that if they rested they would be able to fly again. I talked to them softly. I thought I might be soothing. It’s strange that I thought that, since healthy birds generally fly away if I say anything when I and they are in my garden. Still, I kept softly talking to them.

I got my camera. They were still there, and safe, so far, from cats.

I took several pictures through the window.

Eventually they flew away.

The birds’ accident proved to be a learning experience for me: several months later I was trying to pull a trellis out of the ground when something in my back snapped. Major Pain! I was lucky to have a rolling task chair with me, so I sat on it. The birds came to mind, the way they rested and then quite awhile later, flew away.

I rested and when I tried to go into the house, the pain wasn’t as intense. I was so grateful to the little birds for showing me a way to behave.

Ever since then I’ve thought of birds and other living creatures quite differently. They don’t scream when they are in pain, but the pain is most likely as intense for them as it is for us in similar circumstances.

I’ve often wondered if the birds lived long lives, or if their accident caused them pain that in the end reduced their life expectancy.

4/28/2013 ~ Rufous Sided Towhee Amid Dandelions… sadly not in the sun. Still, what a lovely bird this is!When I went outside this morning I heard a major thrashing sound, so I was pretty sure there was a rufus sided towhee digging. They appear to love to dig. Or, they are connoisseurs of what they dig up for dinner. This is the bird that created a big hole yesterday, but got a huge cutworm for it’s work.