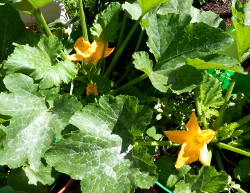 They’ve begun to flower. Actually there’s a two inch long squash on two of the plants. I can’t remember if you’re supposed to harvest the first squash when they are tiny to somehow encourage larger squash later. It seems like I heard that.

The TubTrugs worked really well. I filled one with less soil, so that there was more room between the surface of the soil and the TubTrug cover. I left it outside when night temperatures fell. I was curious to see if the little plants would be sufficiently protected. Happily, they were.

If I still have my home next year, and I very much hope that I do, I’ll know that I can leave the squash in TubTrugs with covers out overnight. That will really cut down on the bringing-plants-in work. 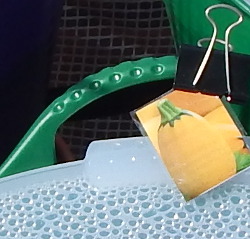 4/10/2015 ~ I’ve just finished planting Golden Egg Squash seeds in a container. The container has a translucent cover, to keep in moisture, and is sitting in the sun. Happiness.

Last year I planted my squash seeds in straw bales ~ Major Fail. I took pictures, so I can show you, but not today.

Previously I tried starting my squash early in the house. I have Solatube, so I thought it would be possible to get a big head start. But, not so much.

Whether my living room was too cold for the squash, or the Solatube didn’t provide sufficient light, I don’t know. There is also the possibility that the underlying problem was Armadillo bugs. I think the last is very likely.