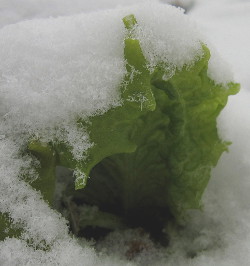 5/17/2015 ~ Yesterday morning my weather station said it was 47* out. I was going to make coffee when I saw that it was snowing. My tomatoes, squash, all my veg in fact, as well as my fig tree I’d just taken outside the day before, were covered in snow.

Coffee had to wait. I have my plants on caddies, so it’s easy to roll them around on the deck. Getting them inside, over the raised threshold of the doorway, is a little more tricky. When I had several pots inside I saw that the tomato leaves looked okay once the snow melted. So, I made coffee and enjoyed some before bringing in the plants I didn’t want to risk leaving out in case it snowed overnight.

Come afternoon I was feeling shaky. I should have felt fine because all the plants were safe, but I still felt as if the threat to my plants was there, about to destroy them.

Today, despite a sound night’s sleep, there’s still a sense of exhaustion as if I’m fighting a dooming threat to my vegetables.

I think the reason must be that Wells Fargo has been threatening to take my home and garden for several years. It qualified me under the Home Affordable Modification Program that was put in place by Congress after the economy collapse, but after I kept the trial period faithfully, Wells Fargo reneged.

Luckily I found a long court decision written by a judge somewhere in New York state, if I remember correctly, in which the judge explained for 56 pages that in order to foreclose the plaintiff needed to have the Original Note because the Uniform Commercial Code requires it. I wondered, of course, if the Uniform Commercial Code applied in New Mexico, where I am, and sure enough when I checked the statutes, there it was.

I immediately did a Request for Production, asking Wells Fargo to produce the Original Note. They couldn’t find it. Years passed with little prosecution on the part of Wells Fargo. After two years of inactivity the judge wrote a warning thing that if nothing was done in such and such a time frame, the case would be dismissed. Wells Fargo did nothing till the last day or so of the allotted period.

Following Wells Fargo’s request for a Rule 16 Scheduling Conference, there was a Scheduling Conference, followed by a Scheduling Order setting a deadline for “dispositive motions” which I understood to be motions for summary judgment. Before the deadline I filed my Motion for Summary Judgment, relying heavily on Bank of New York v. Romero which was a much shorter decision than the one from New York, and very clear on a couple of fronts.

Despite being hopeful there’s this lingering fear, and that, I think, is what was activated by the warm weather snow so many days after May 10th which for decades has been the date we in New Mexico waited for, knowing that after that date there would be no more snow, no more freezing nights.

Elissa Epel who did and continues to do ground breaking work re stress and its effect on nerves, has shown that stress burns out the ends of our telomere, at the end of each nerve. Shorter telomere’s correspond to shorter life expectancy.

I think anyone who’s lived with stress knows the feeling of stress, and how it definitely feels as if it’s shortening your life.

But, what I had not understood is that the initial stress caused by whatever, in my case Wells Fargo, isn’t nearly as damaging as the stress we place upon ourselves by dwelling on the original stress. We keep the stressful feelings alive.

The snow in such warm weather shocked me the same way it shocked me when Wells Fargo did not keep its word and make my loan modification permanent. My health was affected in both situations, but the snow affected my health because I associated it with Wells Fargo not having been trustworthy.

To understand telomeres and how stress affects them and our life expectancy, watch the Elissa Epel video. Enjoy!

Yesterday I was tweeting about stress and how to combat its negative effects. I said to garden. But that was a personal choice and saying it was misleading. You may combat stress by quilting, or going to a movie. I suspect that after beer’s invention its popularity grew as a result of its ability to reduce stress.