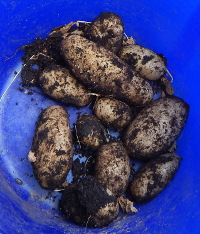 8/16/2015 ~ I harvested potatoes grown from stalks today, partially because I was hungry for potatoes in my brown rice, celery, spinach and tomato soup, and partially so I could plant more for the winter.

Not a bad harvest, especially considering I already dug up two or three large ones for previous dinners.

To store them, I emptied a clay pot, put them in it, set it on my far, hardly used counter, and covered with a stoneware plate to protect them from light.. The green on potatoes is caused by light and is toxic. Basically it’s a way to deter bugs from eating them when they are getting ready to grow into plants. 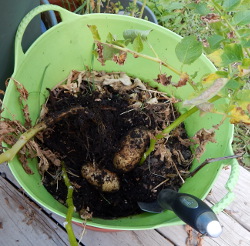 When I dug up the first three potatoes, this is how they looked. I put the two you can see into two different dinners. When I went out for another potato I saw that I’d left a potato partially uncovered with the result that it had turned green where it was exposed to light. I took it inside, cut off the green bit and happily ate it… in a brown rice, veggie soup.

You can see how little soil you need to get a pretty good harvest.

5/14/2015 ~ So… It works! Potatoes are growing from the stalks I disconnected from the potato in the picture below and planted on their own. I wouldn’t have dug up the plant to check, except there were hundreds of armadillo bugs under the mulch, that beautiful mulch I was so in love with when it was new… as shown in the large picture below. I knew I’d used a pot that had some armadillo bugs, I just had not appreciated how fast they multiply.

So, today, instead of trying to spoon out all the armadillo bugs, I went over to a fully clay part of my garden, next to the fence, and dug a hole into which I poured the contents of the potato’s TubTrug. I’d already set the potato plant aside. Now I have a new part of my garden that will be more hospitable than when it was all clay. 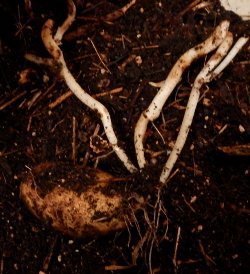 2/23/2015 ~ Yesterday I found four more large potatoes in one of my 24″ pots. Each had a sturdy white plant, looking like roots aiming for the sky.

In the picture you can see how three came from the site of one potato eye. I wanted to harvest the potatoes for upcoming dinners, but I hated to put the established plants in the compost. So, I planted them. I don’t know if they’ll be able to grow without a potato providing nourishment, prior to the stalks growing leaves that reach above ground to sunlight.

Basically, the pot is an 7 gal. TubTrug, in pistachio. The stalks are planted in soil composed of Coir Seedstarter, compost from a previous season of potatoes, and Yum Yum organic fertilizer mix.

Around the stalks are fallen leaves from my Macho Fern and avocados, plus some fallen orchid flowers from an orchid I ordered from Home Depot to raise my purchase amount to get free shipping. (I needed a board for the little washer I ordered.) The orchid arrived looking very unhappy. 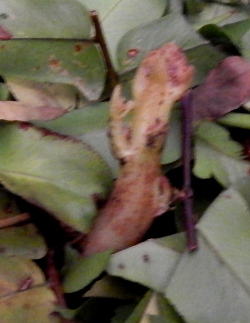 So far it seems as if the potato stalks are growing.

Since the TubTrug doesn’t have drainage holes, I’m a little reluctant to water. Rather than watering copiously, I’m spraying the potato stalks when I spray my mushrooms. I hope that’s good. I hope they are happy.