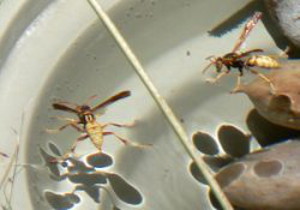 8/25/2016 ~ A UK study discovered that broad bean plants with healthy Mycorrihizae bacterium in the soil and attached to their roots, were able to warn other broad bean plants of the arrival of aphids. The plants that had the warning then produced a chemical that attracted wasps which ate the aphids before they could do any harm.

8/7/2016 ~ I love wasps and enjoy watching them patrol plants, looking for aphids to eat. But, seeing a wasp readying a hole in my deck chair to lay eggs was a bit worrying.

I don’t know if the ladybug house I bought a few years ago, and never used because it was so much bigger than ladybugs it kept stunning me into inaction, will attract wasps, or not. But, I’m giving it a try.

If it works there will be strands of grass sticking out of the “straws” sometime soon. Here’s hoping.

I think wasps swim so they can easily drink… but I love the idea of wasps swimming for the fun of it.

Why provide wasps with a swimming pool? Well for one thing, they love it.

If that isn’t convincing, consider how wasps take care of plants for you so that you don’t have to use pesticides. Wasps get such bad press, when in fact wasps are a great asset in your garden. They patrol plants, looking for aphids and other snacks. Just watch them, you’ll gain a new respect, maybe even love for them.

Think about how pesticides are known to interfere with human brain chemistry, then think about wasps eating aphids and other destructive bugs for you. Wasps do a tremendous favor for you when they eat aphids, etc. If you look at them that way, they are rather miraculous and Wonderful.

If you are afraid of wasps then perhaps you have never watched them and out of fear have missed seeing how they work. They are quite amazing! They fly along the leaves and stems of plants looking for aphids and other small insects that attack plants, and taste good to wasps.

The other day I accidentally bumped into a wasp and noticed that it immediately flew in a direction away from me which shows that they do not attack the way that many people are taught.

I was taught something important by my mother who was stung repeatedly as a child by wasps or hornets, I forget which, so that she had to keep a kit to hand because the allergy she developed could be fatal if she were ever stung again.

What a wasp taught me ~ Read more.