After an ambulance took me to the ER, the hospital tested the electrical activity of my heart using the standard test, an ECG, short for “electrocardiogram”. Basically, an ECG translates your heart‘s electrical activity into line tracings on paper. The spikes and dips in the tracing lines are called waves.

I obtained a copy of my test results. The test is labeled at the top as “Abnormal ECG”, but it was never explained to me. The behavior of the ER doctors, when I complained about it, relieved me of having to pay the hospital. Read more.

It seems somewhat obvious, however, that that the problem making my ECG abnormal is depicted by the line that descends. 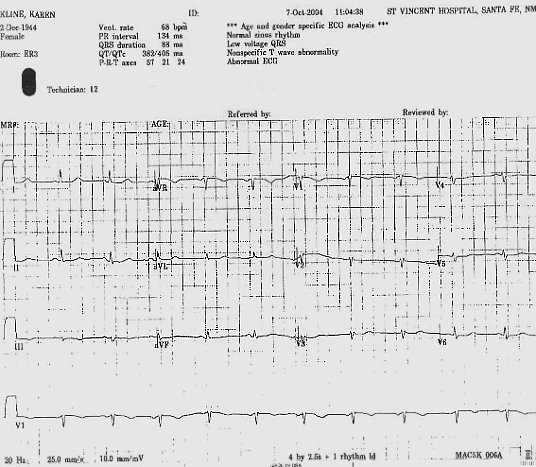 I found the picture below, of an abnormal ECG QRS, on the internet. The black dots may be where holes were punched to use in filing the test results. However, they rather serendipitously help identify where to look for the problem. Go to web page with image and accompanying article. 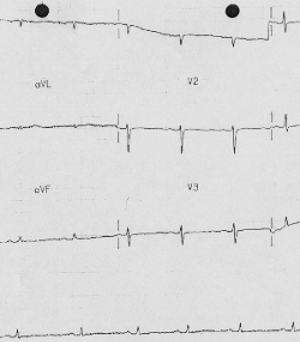 I say that the black dots help identify where to see the problem because my ECG has a similar line on it and in the legend at the top of my test it says, “Low voltage QRS.”

Later I found a study relating to tetanus and ECG changes.

Serial electrocardiograms (ECGs) were recorded in 20 consecutive male patients admitted to the Infectious Diseases Hospital, Calcutta with generalised tetanus. Age of patients varied from 5 to 40 years . Ten patients died. ECGs were recorded daily for the first week after admission and later every 2nd or 3rd day. Altogether, 167 ECGs were analysed.

…Spatial QRS-T angle was calculated in 18 of these patients to determine any possible change in this parameter of prognostic significance. Two out of 9 who survived had abnormally wide (greater than or equal to 55 degrees) spatial QRS-T angle on admission; the angle narrowed with recovery.

In the non-survivor group, 4 patients had abnormally wide QRS-T angles on admission; further widening was noted in patients on whom follow-up tracings were available.

The difference in spatial QRS-T angle between the survivor and the non-survivor groups was statistically significant (p less than 0.05). Spatial QRS-T angle changes have not been reported in tetanus before. Although non-specific, serial study in individual cases would be useful in assessing prognosis.

Final thoughts on my abnormal ECG

I am reminded that when I was in the ER, they saw everyone who came in after me, but not me. I eventually left to go get aspirin, to see if that would help with the uncomfortable feelings I was having in my chest, which I associated with my heart. 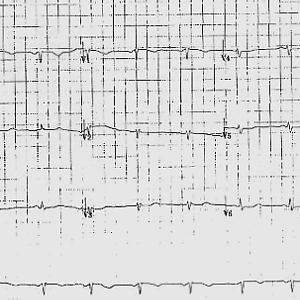 Article Name
Abnormal ECG
Description
After an ambulance took me to the ER, the hospital tested the electrical activity of my heart using the standard test, an ECG. So, what do the results show?
Author
Karen Kline
Publisher Name
Health Boundaries
Publisher Logo