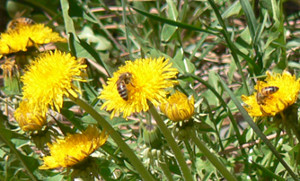 4/30/2013 – Lots more bees this year. Last year, even months from now it was often five minutes between sightings of bees. Now, multiple bees at one time. I love how bees love dandelions.

I was a little worried this morning when I was laying weeper hose, right among them, but no stings. Happiness!!!

3/2/12 – In early February I went outside to sit in the sun on my deck. I was enjoying the warmth when I began seeing bees, some frantic it seemed.

There were no flowers. The Lenten roses I planted last year for the early bees were no where near flowering.

I felt as if I should do something. I called Burpee and Parks, as well as local nurseries. Mostly there was nothing I could order for the bees to eat then and there.

I began to avert my eyes when I went outside, so as not to see the bees in their hopeless search for food.

One bee inspected the entire surface of a large pot that overwinters on my deck. It was as if the bee thought that if it searched hard enough it would find the hope of a flower and food. But, there was nothing.

I called Santa Fe Greenhouses and asked what they had in blossom that I could buy for the bees. They had several things, so I spent my disability money on plants. But when I sent someone to pick up the plants and bring them to me, I found the plants were not as hopeful as had been described. The winter jasmine, for example, had five flowers and no new buds. It had been described as, “covered with buds that will open.”

I began to wish that I had brought in dandelion seed last fall. I could have sprouted it in a large pot and it would be flowering. (When I actually tried that, it didn’t work.) For years I have seen how much bees love dandelions. The problem was I had not imagined bees would ever be out so early. I had not grasped how much warmer it is, year by year.

Later ~ At the beginning of April my pear trees were in blossom and there were one or two bees. I wondered if most of the bees had died of starvation. I sat by the trees, in the eerie silence, waiting to see if more bees would arrive. But, there weren’t more.

I began watering my dandelions, which I don’t pull up because I’ve seen how much bees love them. In a week there were two or three flowers which I watched avidly in the hopes of seeing bees. Dashed hopes ensued.

But now, mid-April, there are masses of dandelions and several bees on them at a time.

Whew. I feel as if there is hope for the bees and for us in our relationship with them.

My plan is to put cold frames over some of the dandelions early next year so that they flower when the weather turns warm and the bees wake up. (I didn’t follow through on this because my health nose-dived.)

I love the dandelions on the path to my solar panel array.

Here’s my question: Would You grow a dandelion to save a bee? 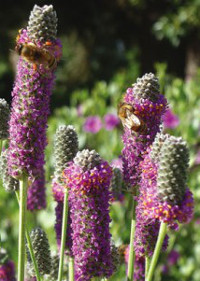 When I wrote to Santa Fe Greenhouses about my winter jasmine experience, they very kindly refunded the price of the plant… So now I’m really excited about ordering from their High Country Gardens online catalog. They have an excellent selection of plants for bees.

They have a little bee icon by plants that bees like.

Above is Purple Prairie Clover. 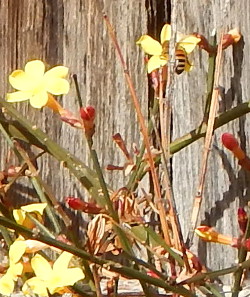 Last year I got the impression bees don’t like the Winter Jasmine.

This year bees are often at the early opening flowers.

I don’t have a better picture only because the Winter Jasmine is fairly far from my deck, and I can’t see the bees clearly.