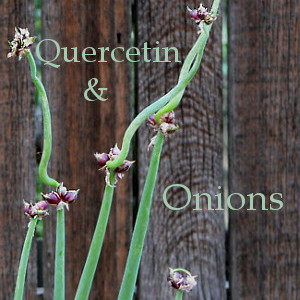 Onions are a good source of quercetin. Why do you care? Because quercetin is excellent at protecting from skin cancer. Not only that, it’s the natural form of Hydroxychloroquin, the controversial, 60 year old malaria drug that President Trump suggested could help you not get Coronavirus-Covid, or conversely, recover from it quickly if you got it.

Skin cancer protection interests me because I had extremely bad sunburns when I was young. One, a third degree burn was from watching a sea otter playing just off the Carmel Monastery beach. Years later my boyfriend’s top-down sportscar gave my nose repeated sunburns. Now, I’m keenly aware of consequent risks.

An April, 2020, mention of Hydroxychloroquin for treating, if not avoiding covid, led to an orchestrated uproar against President Trump. After all, in an election year, an easy, affordable cure would devastate any hopes of a huge death toll making the president look bad.

So, despite Hydroxy having been around for decades it was called a killer… Maybe Pharma had a different kind of killing in mind (“making a killing in profits”), and took offense at cheap, old Hydroxy throwing a wrench in the works.

If possible keep people out of the hospital!!!

Talking about Hydroxy became as offensive to Twitter and Facebook as suggesting after 9/11 that it wasn’t planes that brought down the towers. Tweets were censored, accounts suspended, tiptoeing became common place.

And yet, despite the ignorance and fear being thrown at them, many heroic doctors kept providing knowledge as well as links to positive research studies.

Dr. Zev Zelenko, whose protocol was apparently brought to President Trump’s attention in April, leading President Trump to mention Hydroxychloroquin, went a step further by encouraging the use of quercetin, the natural form of Hydroxy. 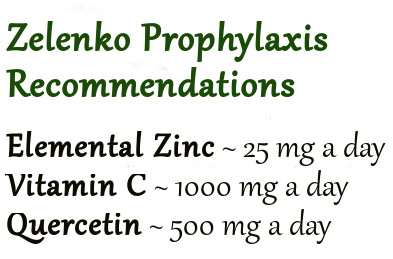 Zinc, involved in cellular metabolism, is required for catalytic activity of 100 enzymes, plays a role in immune function, protein synthesis, wound healing, DNA synthesis, cell division, and supports normal growth and development during pregnancy, childhood, and adolescence, and is required for proper sense of taste and smell [9]. Daily zinc supplements are required because the body has no specialized zinc storage system [10].

6/29/09 — I was too late to buy yellow onion sets. (Onions from my last sets lasted 3 – 4 years.) So, I’m planting onions from atop my Egyptian walking onions. They are darling and flavorful in my brown rice dishes.

From tediously peeling the tiny onions I gravitated to using the leaves/stalks and bulbs. Great in the Spring! But as weeks progress the stalks become as woody as bamboo, making them more suited to fishing poles than dinner. (I exaggerate, but you get the idea.)

Now, years later, I discard the stalks and pop the unpeeled onions into my brown rice. They cook beautifully.

I cook with onions, particularly yellow onions when I can get them, in order to benefit from their high levels of quercetin, which is supposed to fight skin cancer. I’m curious whether my plentiful Egyptian walking onions work as well as yellow onions. That is the question.

Although Egyptian Walking Onions are an heirloom they are seldom named in nutrition lists. That being the case, I had to approach the research from a different angle. Luckily Google’s Scholarly Articles was able to help:

Analysis of 75 onion cultivars showed the following: Total quercetin content in a kilogram of yellow, pink and red onions varied from 54 mg to 286 mg in onions grown in 1992. A kilogram is just over 35 ounces. The best yellow onion they tested was the Sweet Savannah, which accounted for the 286 mg result. White onions showed only trace amounts of quercetin. Onions stored for 5 months showed some change in quercetin content. Variation in Quercetin Content in Different Colored Onions ~

Flavonoids in general are a broad class of compounds defined by their pigmentation, or in other words, color. The term “flavonoid” comes from the Latin word “flavus,” which means yellow. Thus, flavonoids applies to lemons, oranges, grapefruits, yellow figs, etc.

Consumption of flavonoid-rich foods throughout life limits neurodegeneration and prevents or reverses age-dependent loses in cognitive performance. For this reason drug companies are intensely interested in flavonoids as a part of their quest for new drugs promising to enhance brain performance. Drug research has shown flavonoids to be beneficial in dementia, Alzheimer’s, and Parkinson’s. Keep in mind, the functionality of flavonoids is not dependent upon being made part of a drug, you can benefit from flavoids by eating fresh fruit and vegetables, preferably grown by you in your garden without the use of pesticides or RoundUp. Read more.

Check out other foods with quercetin:

Easiest way to use tiny onions

8/25/2013 ~ Yesterday I discovered that I don’t have to peel the little onions, just cut off their bottoms and let the papery top layer flake off. Easy, EASY. I put a scad of them into my brown rice… It was delicious!

Article Name
Onions and Quercetin
Description
Onions are a good source of quercetin. Why do you care? Because quercetin is excellent at protecting you from skin cancer.
Author
Karen Kline
Publisher Name
Health Boundaries
Publisher Logo