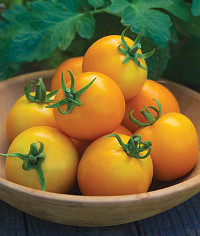 2/13/2015 ~ I want to plant tomato seeds. But, in years past just when I’m delighting in young tomato plants, they are felled by armadillo bugs, also known as pillbugs, doodlebugs, roly-polys.

Last year in an effort to have armadillo-free pots I used composted mulch and rock dust, the praises of which videos extolled, i.e. high praise.

Some things did okay. But I had no peas to speak of, as opposed to a dozen and a half sturdy pea plants supplying me with a good handful of peas a day for lunch. I had to admit defeat, but I remembered that in the past I used outside soil as starter for my indoor compost. It’s great for including a worm or two, which multiply over winter, but invariably there are armadillo bugs, which are hard to see once they roll into a pebble-looking ball. 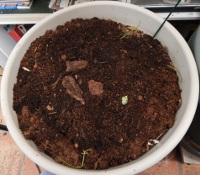 The 24″ Fiskars pot in which I want to plant solar tomato seeds, since they seem to be the happiest to over-winter indoors, doesn’t look like it has any armadillo bugs. But, they’ve fooled me before. 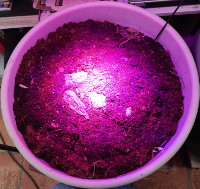 After hours of thought my plan is to add some enriched soil, dig it in, then put some bark pieces on top and keep the Red/Blue LED light on during the day. The pillbugs love the warmth from the lights and they love to have a nice piece of bark as a roof over their little, lobster like bodies ~ I just learned that they are not insects, but in fact crustaceans, like lobsters.

2/16/2015 ~ Ay yii yii. (expression used to show frustration, hopelessness, sadness, annoyance and so on and so forth.) Yesterday I removed dozens and dozens of armadillo bugs from the soil. Today as I began topping up and turning the soil there were three bugs, in the very first trowel full. Two were easily lifted out, but one successfully hid for nearly a quarter hour.

Back on track, I mixed armadillo-free soil from my 24″ pot with peat moss. I’d previously put small peat pots into a 6 pot tray that came with plants I ordered last year from Parks. The plants had the best root systems of any plants I’ve ordered in years, not counting 6″ pots from High Country Gardens. 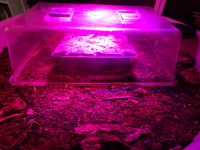 I planted one Solar Tomato seed in each of the six pots, covered with the peat rich soil, watered, and set on top of the soil in the 24″ pot. I covered the tray with a Parks Bio-Dome and turned on the Red/Blue LED light.

On second thought I took the remote thermometer from my mushrooms and put it under the dome with the tomato seeds. It read 58.1*. I’m very curious to see if the temperature rises as the light, hopefully, heats up the soil and interior of the dome.

A few hours later: it’s up to 60.3* under the dome with the LED light shining on it. Just to be clear, that’s 2* warmer than the rest of my living room.